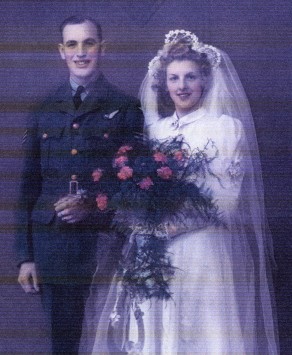 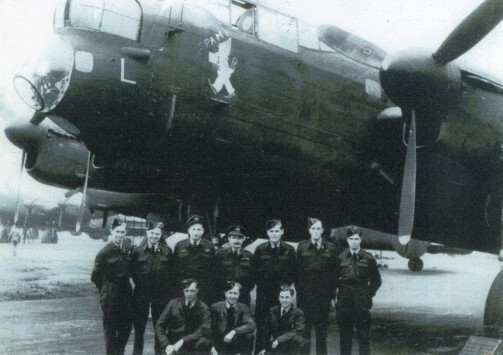 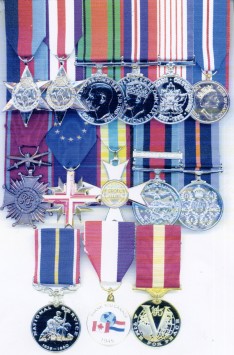 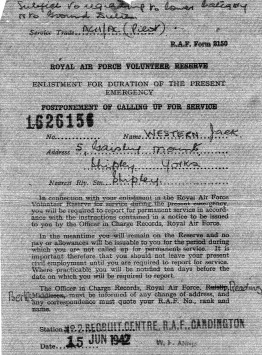 My name is Jack Western. I served with the Royal Air Force as a rear gunner on Lancaster bombers.

A trip that we took to Bremen on a daylight mission, we took off from RAF Station Scampton with a full load of high explosives and we were flying in beautiful weather. And, while we didn't fly formation, we had agreed privately that we'd all stick together in a group, which we usually called a 'gaggle'. That meant we were loosely flying with and around each other. And the plane that was flying next to me had some NCOs in it... non-commissioned officers. And especially the two guys in the back end, the mid-upper gunner and the tail gunner were roommates with me. And we were flying along side-by-side and I would say, probably, a couple of hundred feet apart. The weather was beautiful and there were no incidents at all. Just flying right along, everything was just beautiful. Sun was shining, and you could see for miles and miles and miles.

And, shortly, we began to pass over a German aerodrome and you could see it was unoccupied, in fact nothing could take off from there, the runway was completely pitted with shell holes. Just as we passed over, a hidden anti-aircraft gun opened fire and fired up five shells. The first shell exploded about two hundred feet away from us. The second exploded near our right or starboard area and caused the aircraft to rock violently. And the third shell exploded way to our left causing us to rock violently in the opposite direction. And the fourth one exploded right inside the aircraft flying alongside of us. And it entered between the mid-upper turret and where the navigator would be sitting. It exploded right inside. And blew the aircraft into two pieces. The mid-upper gunner, whom I had become quite friendly with, I saw him actually fall out of the aircraft. Of course he was wearing no parachute and I just fervently hoped he was already dead before he fell. And the tail gunner, who had just, seconds before that, been waving at me and I'd been waving back to him, he went down inside the turret which was spinning violently over and over and over, until it fell out of sight. The plane itself went down in what we call a flat corkscrew. Circling round and round and round and round and round and round, all the way down, from about 12,000 feet. Ten seconds after the plane hit, all that was left was just a hole in the ground. And it was just so shocking. It happened so suddenly. We have no alternative but to carry on.

We got to Bremen and as we went in, the bomb aimer got us lined up for the target and we started with the count ten, nine, eight down to zero, which would be bombs gone. The bomb aimer got to the count of three and a voice came over the radio saying, "Whitewash. Whitewash. Whitewash," which was the code word to cancel the trip. So three or four hundred of us just simply turned around and went back to Britain, still carrying all our bombs. As we came out, we passed a whole flight of Halifax bombers just coming in to complete what we were supposed to have started. However, the troops had gone into Bremen not waiting for us to soften the place up, been repulsed and the second of Halifax's went in and actually bombed and then the troops went in.