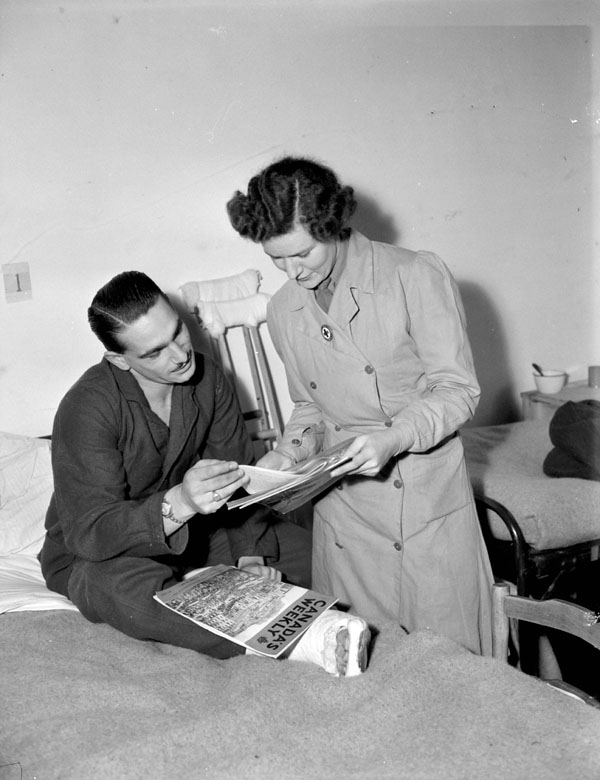 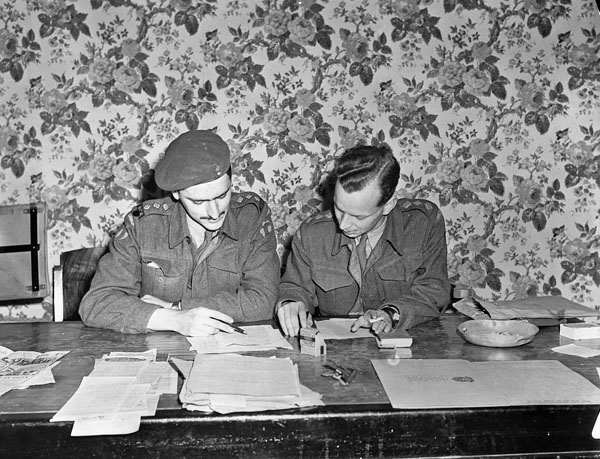 First let me say that my background, I have a politically leftwing background. My grandfather was a socialist, my father was a socialist and then in 1920, when the Communist Party was formed, they became communists and I grew up in a communist family. And as a youngster, I became a communist, a young communist and I continued that right through. And I began to get disillusioned and discouraged early in the late 30s and through the war with Stalin and finally, eventually, in 1968, I left the party.

One day, and just after I finished basic [training] and ready to start my training in signals, I got a call that the army examiner wanted to see me. I didn’t know what an army examiner was but I went to see him. And I was standing in front of him and he’s got documents in front of him and he says, “Corporal Boyd, you will have to leave signals.” I says, “Why.” He says, “I’m not at liberty to tell you. And I saw, being an editor, working in the print shop, I could read upside down, I saw on his document he had in red, Signalman Boyd and non-sensitive. And I knew right away what that meant. And I said to him, well, I asked why. He said, “I’m not at liberty to tell you.” I said, “Well I know, it’s for political reasons because I was a communist.” And he says, “Well, I can’t recall that, you just have to leave.” And I says, “When?” and he says, “Right away.” I said, “Well, can I complain about it?” He says, “In the army, you can’t complain, you can protest.” I said, “Well, who do I protest to?” He said, “Well, you could write a letter to the army examiner in Ottawa and explain what it.” I says, “But, can I do that now?” He says, “No, you would have to leave anyway.”

So I was rather disappointed of course, I went back to my hut and as luck would have it or serendipity, the chap next to me in the hut got the measles. And we were quarantined for six weeks. And I said, “My goodness.” Oh, I forgot to tell you that he [the army examiner] said, “Oh yes, I could write a letter.” So I decided, since I’m quarantined for six weeks and can’t leave, I’d write a letter to the army examiner in Ottawa, which I did. And in the letter to the army examiner, I said that I don’t understand why I can’t stay in signals, I says, I have never been arrested, I’ve never done anything against the country or anything. Moreover, I said, I know communists, people who are communists who joined the army and went overseas and some reached the rank of major and I didn’t have any names, I said, one made captain and there were many lieutenants, they were communists and I don’t see why I couldn’t. So I mailed the letter and waited with doing nothing, not going to signals and I had finished my basic. And then I got a call from the army examiner, said that I could stay.

Soon after I was interviewed by the army examiner, I get a call, there was a notice that they’re looking for an editor. Here’s what happened. The editor of The Signalman [Royal Canadian Corps of Signals’ magazine at Camp Barriefield, Kingston, Ontario], who worked in the print shop in Kingston [Ontario] was found drunk one day and so he was fired. And so they put out a notice, people with editorial experience, they want to apply for a job being editor of the camp magazine, Signalman.

So I applied and I was interviewed and there was Dennis Braithwaite who worked on the Toronto Evening Telegram [Toronto newspaper published from 1876 to 1971] at the time, came in there to join us, about three or four of us. But my name was Boyd and they interviewed me and they gave me the job right away. So I became editor of The Signalman and started a whole new life for me.

Now, the magazine was a rather boring thing, it was just the usual army thing promotions and the leavings and comings and goings on. And I decided to revamp it. I started to put in some anecdotes, jokes, making sure they weren’t too risqué but on the borderline. And I wrote editorials about things in the army. I wrote a book for example about the, what was happening on the fronts and so on and I wrote an editorial about the “zombies” [derogatory term for Canadian men who were conscripted for overseas service in 1945 as part of the National Resources Mobilization Act] saying “zombies” were those who didn’t volunteer but there was volunteers and those who were drafted were called “zombies.” I wrote an editorial saying why people should join the army because of the situation on the fronts and so on.

I also did something else. In the army, there’s a corporal’s mess and the sergeant’s mess. And the two entrances were close by and I decided, I got large sheets of newsprint and every day, every noon hour, these soldiers would go in there for a beer, I got a large sheet of newsprint and on the newsprint, in the morning, I would put in two line news item, two lines each, so what’s happening on the front mainly and also things happen in the government, important events, world events and Canadian events. And I knew that these soldiers, a lot of these soldiers never read the newspaper, didn’t have the newspaper and in those days, they didn’t have portable radios like they did later. So it was a service for them and they did stop to look at briefly, quickly at two line items, find out what’s happening. And the brass appreciated that.

Another thing I put in, I got a cartoonist at the camp to write, to create a character named the Vimy Wolf. It was a soldier in uniform but with a wolf’s head and he was leering at lovely women in bathing suits and so on, surrounded by them and he was a Vimy Wolf. In other words, the guy was out for the girls. And that became a very popular feature, people were looking forward to seeing what the Vimy Wolf was doing that month. And of course, they appreciated the jokes, I had a lot of jokes.