"Well, when you’re crawling, every time I put my hand down, I thought, golly, you know, you hit a mine, that’s the end of me." See below for Mr. Forbes' entire testimony. Please be advised that Memory Project primary sources may deal with personal testimony that reflect the speaker’s recollections and interpretations of events. Individual testimony does not necessarily reflect the views of the Memory Project and Historica Canada. 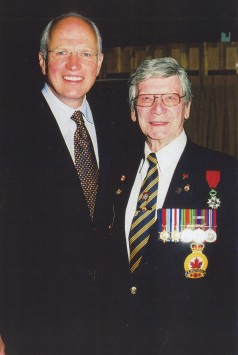 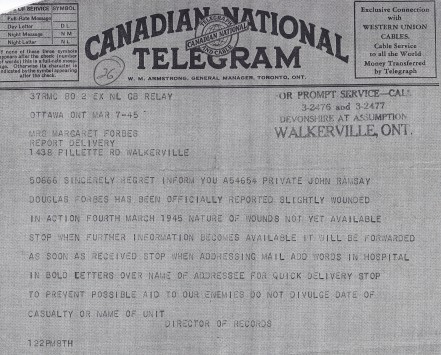 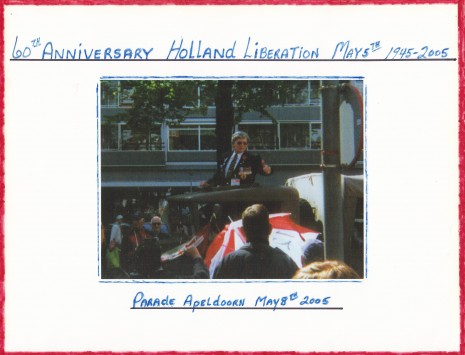 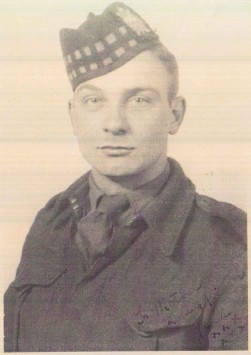 Now, when I joined up, I was going to high school. I was in the second form and my teacher, he was a captain in the reserves, in the tank corps. And he knew I was only 16. In May, the tank corps mobilized and he went in as a captain and then I, I was in with my father. And on the first inspection he did, he stopped in front of me, looking real stern. He knew I was 16. He said, did you shave this morning, trooper? I said, no sir, I don’t shave. He said very sternly, he said, you’re shaving now whether you need it or not, every day you’re in the army. Then he broke out into a big smile.

We were in Belgium and we had a very fierce battle getting up into that town. And the Germans moved more north in Belgium towards Holland. We knew they were going to regroup and they were very tough. And we were in individual buildings, waiting for word to move ahead. And we’re all sitting around and I was sitting on the floor with a few fellows on my right. And a fellow come over and he says to me, I’m not from your section, he says, I’m a, I’m from another section. But he said hello to the guy on my right, he said, this is my buddy here, next to you. And he said, you know, I come in on D-Day and he said, I’m the only one in my section that hasn’t even got a scratch. He said, could you move over a little bit and I’d sit between you and my buddy. He said, we know we’ve got a fierce battle ahead and he said, maybe none of us is going to come out of it this time and I’d like to talk with him. I said, sure, that’s fine. And when we got the order to move out, he said, well, all the ones on the right of me, they were going out first, so he said, I’ll stay in front of you and he said, as soon as I step outside, I’ll wait for my section to come. So as soon as he put one foot out, a sniper got him through the head. And that would have been me because the snipers, you know, they’re going to count so many people some time and then shoot say the sixth one or seventh or something. So if he hadn’t have done that, it would have been me. And so that’s why I said the heroes are buried over there because a lot of them, they gave their lives for us.

What we had to do then was wait around a bit so they had to send some people out to look around and try and find the sniper. We never did find him because they find the good place. They know where we’re all going to be set up waiting to move ahead. And so they have their escape routes. They’re going to do what they’re supposed to do, they’re trying to hold us up a little bit, which they did. And then they get up ahead to their units again.

Another time when we were in Belgium, we were walking through, we were going through some big area. I know it was a mud road, a dirt road and we had trees on both sides of us. So some of us were marching on the left side of the road and some on the right. And we had the same thing happen that happened in Brighton. A German plane had come right over us from behind and flew straight past us and as he come, he waved his wings again, left and right and he kept going. He could have shot us all up but he had his own target, I guess. Or he might have been going in someplace to land and give himself up.

Well, we found, the regular German soldier, they were more like we were. A lot of them had to be there fighting. If they didn’t go in, they would have been sent to labour camps or they would have been shot. The worst ones were the SS and the real young ones. One German general, right when the invasion started, they, they were responsible for killing 134 Canadians, murdering them, because they gave their rank, name and serial number which we were told to do. And nothing else. And when they couldn’t get any information, they murdered them.

When I got wounded, Bill Kennedy was my piper. And when we were in Holland, we were in Nijmegen for a couple of days. From Nijmegen, we went over the Nijmegen bridge into Arnhem. That’s all right on the German border. So in Arnhem, the officer asked me to drive the carrier down through and I had a regimental sergeant, he was the regimental police sergeant. He was in the carrier with me in the back and then I had my Bren gunner next to me on the left. And so I went down the embankment, there was nobody around at all, just a big forest. And three young Germans come out carrying a flag, wanting to surrender. One spoke fairly good English and so we got out, went over. We had our weapons with us, not knowing if they had anything hid. And they said, we want to surrender. They said, we don’t want to fight anymore and they said, we’re sick of it. And I said, well, keep going the way you are, I said, we’re fighting. I said, all your people are ahead of us and we’re going to meet up with them and I said, we can’t take prisoners. I said, keep going, like you are, keep your flag up and they did say, well, there’s lots of mines in through there.

When they left, we thought, well, we’ll go over. We seen a road going down into the forest and we said, we’ll just check around and we seen some wide tracks, very wide tracks from a German Tiger tank. So we thought, well, let’s walk down the track a little bit because we should be safe there. Well, the sergeant that was with the regimental police, he says, well, he was about 10 feet in front of us and he stepped on a mine. And we seen his leg tore right off. And the gunner, Bill Kennedy, he was hanging onto my arm, the left arm, and he said, I’ll put a tourniquet on his leg. And he made one step and he stepped on a mine. I couldn’t see, I was blind then because I did get hit in the left eye and my right eye was bad too and my face, I was wounded in the left leg and the hip and the head. And I said, I can’t help you, I can’t see. And I said, if you can tell me when I turn, the, the little bridge, because it was just a slight grade up to the road we turned off of, I said, I will get help. And so I crawled a bit and staggered a bit. They told me to turn and they said, just keep going up. Well, when you’re crawling, every time I put my hand down, I thought, golly, you know, you hit a mine, that’s the end of me.

Anyway, I got to the top and I told them that my two buddies were down there and I said, I know they’ve both lost a leg and I said, they said, well, you look bad, there’s blood all over your face, I said, I can’t see and their first aid man bandaged my head and they said, we’ll send our men down with two stretchers to get them. So they said, don’t worry about them. They got me back to a, in the Jeep to a field post hospital. And then they, I was there for a day and then they flew me into Belgium, where I was at a, a general hospital, army hospital. And they took quite a bit of little pieces out of my left hip and a little bit of the left buttock and the leg. And they took a piece of shrapnel two weeks later out of the left eye; they didn’t want to do it right away. And they treated the right eye. So I was, instead of being real blind after that, if you come up to talk to me, I would just see a shadow, I wouldn’t know who you were unless I recognized your voice. But after three months, I was in pretty good shape.