"We had some tough battles but nothing like Carpiquet. We had our first rest period after 39 days."

"We had some tough battles but nothing like Carpiquet. We had our first rest period after 39 days." See below for Mr. Tremblay's entire testimony. Please be advised that Memory Project primary sources may deal with personal testimony that reflect the speaker’s recollections and interpretations of events. Individual testimony does not necessarily reflect the views of the Memory Project and Historica Canada. 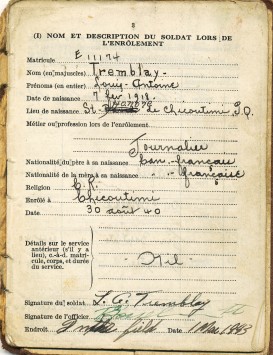 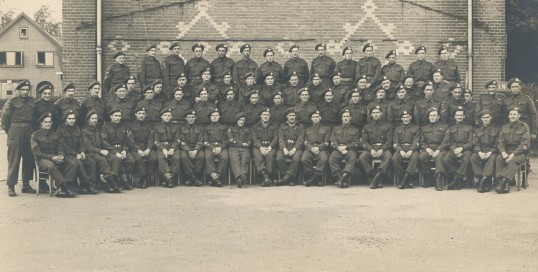 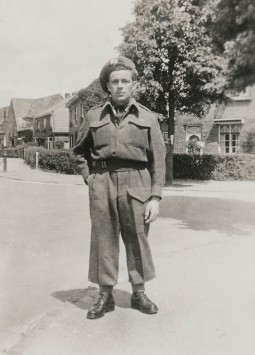 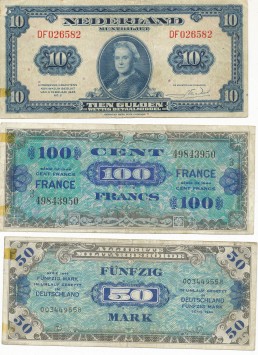 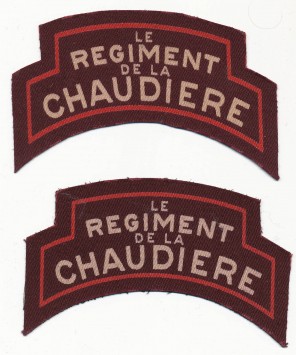 I come from the Saguenay region. We boarded the landing craft in England on June 3. We were supposed to get there on the 5th but since the sea was tumultuous, and there was a storm, they delayed us by a day and we arrived on the 6th. We left England on landing craft and we travelled a distance of 140 kilometres. When we arrived within sight of the coast of France, we understood the extent of the situation. As far as the eye could see on the water, there were ships. Five thousand ships participated. There were thousands of planes in the sky. Both sides were being bombed, the Germans as well. We got out in the water since our landing craft could not come ashore. We made it to solid ground. We lost people, for sure. Some were killed and others were injured. Most of the troops were able to make it to solid ground. We took the town of Bernières-sur-Mer. We went to sow and reap death. It’s as bad as that.

We crept along the houses, in the streets because the Germans had put obstacles everywhere. Some were hiding with machine guns. To avoid being shot, we crept along the houses. At one point, there was a French woman, the first French person that I had seen. She was hiding in her basement. She had heard us speaking in French. She said to us, "Do you speak French?" I told her that we did. She asked whether we would be staying or leaving. She thought we were just lending a hand, like at Dieppe. I told her that we were here to stay. She came out of her house with a bottle of Calvados. She gave us each a small glass of Calvados, we spoke for a few minutes and then we had to be on our way to get back to our job. When I went back 40 years later, I met the same woman and I chatted with her. We shared another glass of Calvados.

The first evening that we arrived, we were near Carpiquet, near Fontaine-Henry. It was there that we had encountered the Germans’ first major counter-attacks. We only had canned food. For weeks at a time we hard sardines Monday, Tuesday, Wednesday; sardines all week. The guys would get sick of their cans of sardines and throw them away. This led to some small thievery. It was prohibited but they would steal eggs from chicken coops. It was a change for them. They were not supposed to, but I would look the other way and say, "Don’t get caught." One guy named Theriault, he came along one day with his steel helmet full of eggs and three or four bottles of wine in his arms. He ran into a French woman and she said to him, "My God, have the Canadians come here to save us or to steal from us?" Well, you know how French Canadians speak; lots of bad words. So he replied to her, "Both, goddammit!"

In the end, there was only one soldier left standing [of “A” Company]. His name was Roy, L.V. [Louis Valmont] Roy. He had been loading the gun alone and firing at the tanks. Finally, he died too, still manning his gun. I say he saved the regiment. We were almost surrounded. We were there for four days, and we spent two days without eating. No water, no food, nothing. We managed to maintain our positions. We had sixty-eight casualties and hundred or so wounded. When Carpiquet was finished, we had taken the airfield and all of that. I said to myself, "Even if the war lasts ten years, I won’t be killed." It could never be as bad as that, it was dreadful. It was never as bad as that. We had some tough battles but nothing like Carpiquet. We had our first rest period after 39 days.

We had landed in the water and our clothes dried on our backs. We only took our boots off after 39 days. Our feet were rotting in our boots. After 39 days they took us to the rear of the front line. They gave us dry clothes and let us take showers and eat a good meal. The next day, they took us back to the firing lines. That was the only break we got. It was like that until the end of the war. When we got to the city of Rouen, members of the French resistance who gave us information. They told us that the Germans, as an act of reprisal against the Resistance, had tied up 13 men and women, probably chosen at random. They had tied them to posts and shot at them. When we arrived, those people were still tied to the posts.

The ground was, Holland is below sea-level. We tried an amphibious landing but we couldn’t. They saw us coming. So we spent the day hunkered down in the rushes, with our feet in the water, and then on ground when we could. Because the minute the Germans saw the cattails moving even slightly, they would fire off rounds with their machine guns. So we couldn’t move. We would stay there during the day and then get onto the dike at night. We made a bit of headway each day. We liberated the west bank of the river up to Ostend, Belgium. The east bank was where the English-Canadian regiments were.

It found it hard my entire life, since I never forgot my friends who died. I think about them every day. I was the one of the eldest. I had young men who were 18, 19, 20, 21 years old. When I lost one of my men, it was as if I had lost one of my own children. I returned after 40 years. I cried when I saw the beach where we had landed, I asked myself a lot of questions. How did I manage to get through that? I visited the small cemetery at Bény-sur-Mer. I saw the names of my men who died. I thought to myself, "How can you have been sleeping here for 40 years, but I am still standing?" Once I returned to civilian life, I felt destitute and alone. All of my friends from before were either married or doing their own thing, they had their own lives now. It was hard. Thank goodness that I had a wife who helped me a lot because I don’t know what would have happened to me. It was as hard as the war. Because mentally, I felt disoriented. I had a wife who helped me a great deal and I adore her, I still do.