"We were in a big convoy. No matter where you looked you saw ships."

"We were in a big convoy. No matter where you looked you saw ships." See below for Mr. Knott's entire testimony. Please be advised that Memory Project primary sources may deal with personal testimony that reflect the speaker’s recollections and interpretations of events. Individual testimony does not necessarily reflect the views of the Memory Project and Historica Canada. 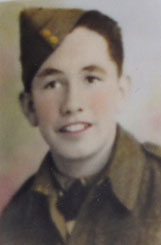 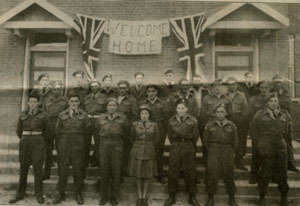 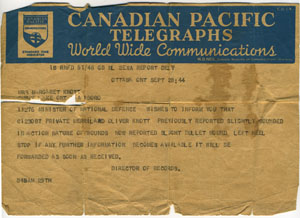 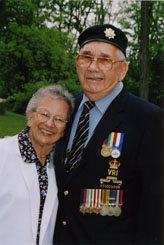 I joined up right on my seventeenth birthday, 1943. I had basic training in Cornwall, and then advanced training in Camp Ipperwash, and from Camp Ipperwash I went overseas. I stayed in England overnight. The next day we were on draft to go to Italy, and I believe we were about sixteen days going to Italy from England. We were in a big convoy. No matter where you looked you saw ships. A whole bunch of us young fellows were looking forward to seeing the Rock of Gibraltar, but the convoy stopped way out in the ocean, and we went in past Gibraltar at night while we were sleeping, and we eventually landed in Italy up around Naples. We were trucked over to the rear echelon, and first there was a role-call. There was a little village there named Avelino. After the roll-call we were told we could go and look around. There was an English canteen there. So we went down, and I met a couple of guys that were from my home village. One was guarding the battalion headquarters, and we went to canteen. There was another Curve Lake guy there, and he had been wounded so he was cooking in that cafeteria. I got talking to him, and he said, "I heard that you came overseas but I didn't expect to see you here." I said, "Here I am!" "What are you doing here, anyway?" he said. I told him, "I came over to help you lick the Germans." So he kind of laughed at me, because I was just a young man of seventeen. I was small, five foot five, a hundred and sixteen pounds. We went back up to an old house that we stayed in. We had dinner, and then we were to go on maneuvers up on a mountain. We got up to where we were supposed to have maneuvers, and we had settled down for the night, laying outside. We settled down, and a little while later we heard motorbikes coming. Shortly after the motorbikes stopped coming, there were trucks coming. The Sergeant and the Lieutenant came along. "OK, boys!" they said. "We're preparing to move." So we got ready and loaded on to trucks. The Captain was there and he said, "Well boys, you're heading for the front lines. They said, "God Bless You."