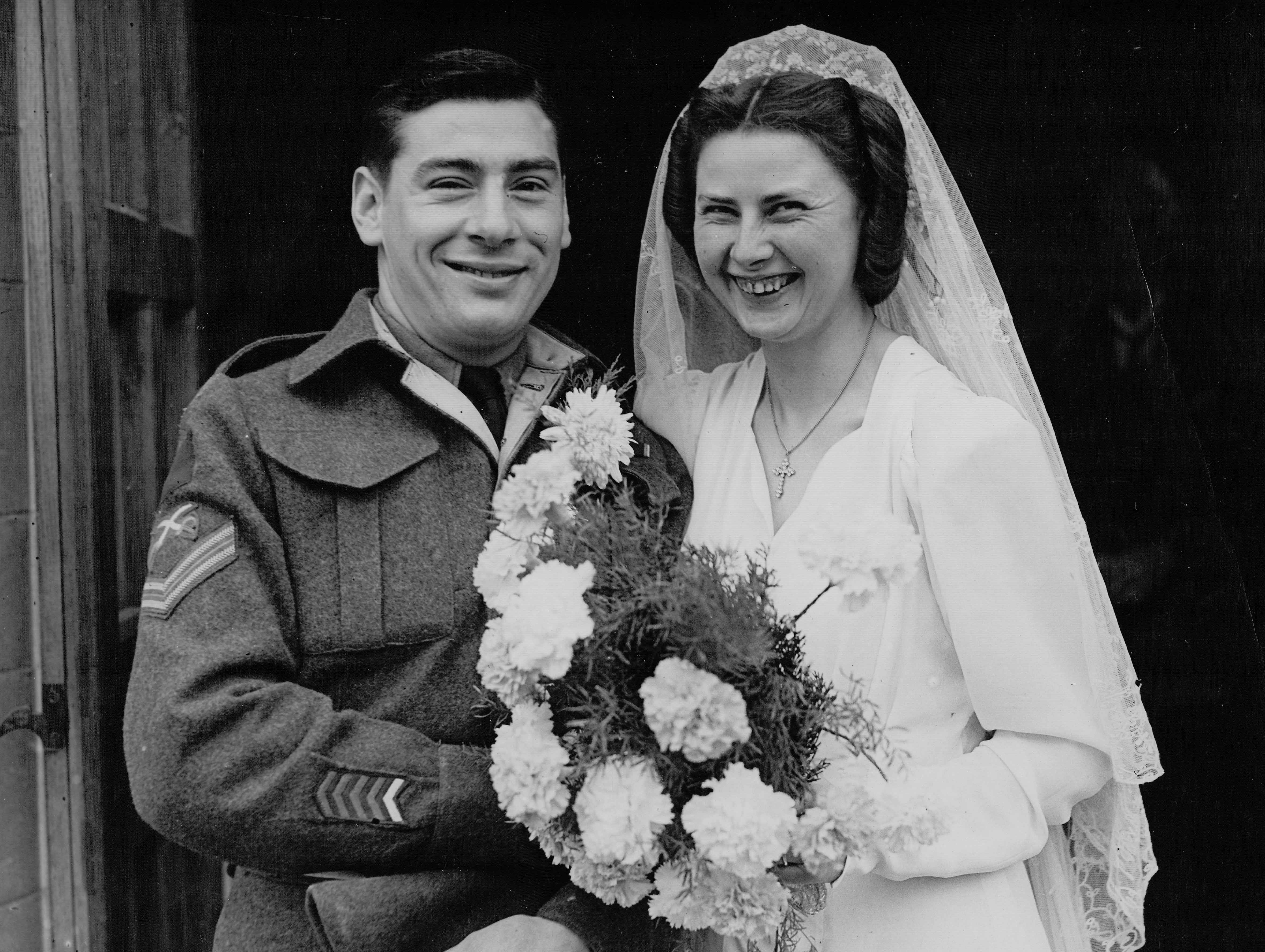 Paul and Joan Dumaine on their wedding day in England on July 4, 1945.
(Courtesy of The Memory Project/Paul Dumaine)

"On August 19, 1942, we arrived in Dieppe. My fiancée had no idea where I was. The battle was poorly organized. We lost everything we had to lose."

I have to tell you about this; because it wasn’t all war, there was also love. I met a young woman, who I became engaged to. We didn’t want to get married because the war was going strong and I could have been hurt or killed. So we said that we would wait until after the war to get married. So I asked her to marry me. She was young. One day, I left for Europe. I arrived in Dieppe. On August 19, 1942, we arrived in Dieppe. My fiancée had no idea where I was. The battle was poorly organized. We lost everything we had to lose. I was injured and then taken prisoner.

Over there, the beaches are made up of little round pebbles. You walk and you roll. The tanks couldn’t advance. The little stones would get caught in the tracks and they would break and remain stuck. All of the tanks were on the beach. A couple of them ventured into the city but then they came back. Most of them were stuck on the beach. They could still shoot but they couldn’t advance.

They had trouble getting messages out. The ships at large received a message that the city was occupied by the English-Canadian regiments, but that was wrong. They had said that only a few men had advanced that far. They understood that the entire regiment was in the city. As it was occupied, they told the Fusiliers Mont-Royal, the reserve unit, to go in. They received the order to advance. We landed in broad daylight. We got there and the beach was ablaze. The battle was full-on. Everyone was getting killed and falling down all over the place, it was terrible.

I collapsed after an hour. My head was injured. I stayed a long time there just doing nothing. I couldn’t walk. It was like I was paralyzed. I was bleeding and I wanted to get up. I wanted to go wash myself off in the ocean. I wanted to get up, but I couldn’t. My legs were paralyzed from the shock of my injury. I had to drag myself on my elbows to the ocean. I washed my head with water. There was a great big boat called a tank landing craft; a boat that carried tanks. The doors opened and the tanks came out.

One of them had foundered on the beach. It was there and it was burning. Just a bit of fire. It was there on the beach and it wasn’t moving anymore. We used it as a shelter to hide from the Germans. The injured went and sat at the back of the boat to avoid getting shot at. I went there right away. I had nothing left, no weapons. I stayed there for a while.

All of a sudden, I saw a German. He was an airman, and his plane had been shot down. He was making his way towards us on a little rubber raft. He arrived ashore shore and came towards me with his arms up yelling, "Kamerad!Kamerad! " He thought we were going to kill him. He came and sat beside me. He took some photos out of his pocket and he showed me his wife and children. He wanted to soften my heart so that we wouldn’t kill him. He said, "Fräulein, Fräulein" for his wife and "Kinder" as he showed them to me. I didn’t pay him any attention; I couldn’t speak German. He stayed there until the end of the battle.

After I’d been taken prisoner, I was released. I was ill. When I got to England, I stayed in hospital for a month. She learned from others that I was in England. She was still in the army then, we weren’t yet married. The colonel called her to his office and said, "Joan, I have some good news for you." She thought that it was news from her parents. "Your fiancée is in England, at Aldershot. I know that you would like to see him.” She said Yes, yes, yes. “I am giving you a pass. Get dressed in civilian clothes and go see him." I was lying in my bed. They said to me, "Dumaine, you have a visitor." She was there. It had been three years. When I saw her, she was so beautiful. I took her in my arms.