"You just do what you were told and don’t ask any questions" See below for Mr. Hurst's entire testimony. Please be advised that Memory Project primary sources may deal with personal testimony that reflect the speaker’s recollections and interpretations of events. Individual testimony does not necessarily reflect the views of the Memory Project and Historica Canada. 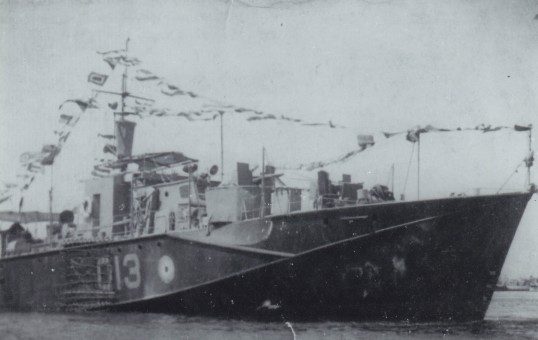 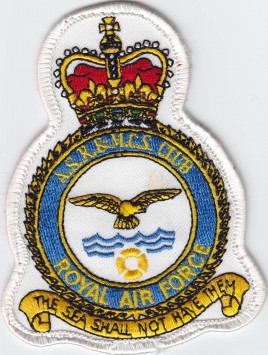 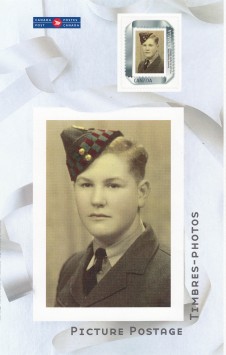 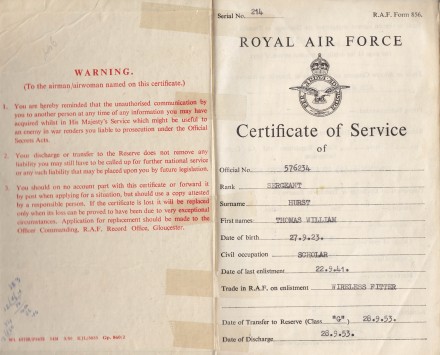 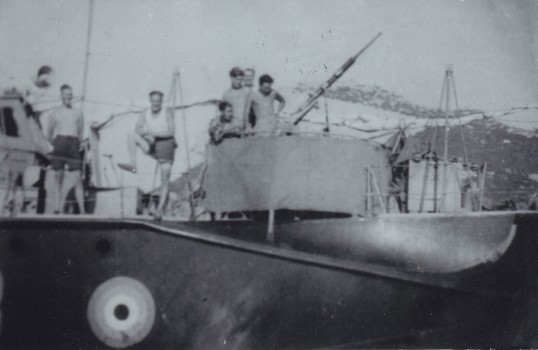 I came out of Cramwell as an apprentice and I was posted to a station near home which was - the policy was nice, they posted if they could, to a station near home. Served on a transmitting station of a bomber station about 10 miles from home. But not very long. I was called up and sent down to report to a certain place in London, a private house, which is very baffling. And it turned out, I’d been selected to do this intelligence work because I was a very good wireless operator in Morse code and also I’d done the course on the air force’s Typex coding machine which was very very well advanced ahead and of the German Enigma and it was very secret. But there was one in Dublin.

And I was changed into a civilian, went home in uniform, took my uniform to the nearest air force station, they were expecting me, changed into civvies [civilian clothes] and went back down to London with another man who went with me, he caught the train across to Dublin. In Dublin, I lived in the United Kingdom High Commissioner’s office on Mount Street in Dublin, over Lower Mount Street. And I occupied the balcony, well the attic they call them, up in the attic, where my radio equipment was in the room below and the Typex machine was housed in.

And I had nothing to do with the normal daily activities of the High Commissioner’s office itself, diplomatic or whatever. I went in and out of the place through the back door, mainly, and they knew I was there but nobody asked any questions, I think they had been briefed about that. So it was a very lonely stretch, I was on my own. This other chap, he went someplace else and I don’t know what he did. He didn’t do what I did and that’s the way it goes. The less you know, the better.

And I operated it twice a day, I called up England on the radio on times that were drawn out of a hat, just to establish contact. And I also had the job of looking at the [carrier] pigeons. Every month I opened the hatch on the roof and they flew out, got a new box of them. I had to learn a little about pigeons to look after them and how to put messages on them. I’d never been trained for that but that was interesting.

I had radio a radio set, underneath the floorboards of a house, near the Leopardstown race course in Dublin, just outside the room which I occasionally went to and looked at. There was never anybody there when I went and again, the purpose was if we had to evacuate the embassy, I could still keep in touch. And I also, there was one communication set in the back of a car, which was parked in the garage at the back of the Commissioner’s offices. And I remember looking at it and checking it, I don’t know what it was for except presumably if we had to move in a hurry up North, I would use it.

But you want to get your instructions when they give them to you. You know, you don’t ask any questions because you don’t get any answers, so there was that part of it, I guess. And occasionally, I would go out and meet with parole, men on parole from the internment camp. There was a cutter, they were kept in the cutter. These were British air crews who had crash landed, and Germans, who had crash landed in Ireland and they were taken into custody and put in this, not internment, not a prisoner of war camp, and they were on parole, not to escape. So they would come out in groups into the town and occasionally, I’d be told to go and meet them and give a certain opposite or a certain person a communication in an envelope and then I usually wound up going out with them because they were in a group and stayed with them, of course they got taken to the places like James Street brewery from Guinness, and got free beer. And things of that nature. You just do what you were told and don’t ask any questions.

And the, the actual press attaché at Dublin at the time was John Betjeeman, who later became Sir John Betjeman, the Poet Laureate to the Queen. And I had plenty of spare time on my hands, I used to sit down and tune in on the 20 megacycle band [frequency] and read down the Morse that came in from British United Press, Reuters, Pravda, the Germans and the American Associated Press and write down - every hour they would change the subject of the news. And it was through this that’s when I found out that there were six different wars going on because all these news that comes from these people, it was always coloured in a different direction. And it was sort of interesting sometimes to think, you know, that there’s six people patching out news bulletins, which newspaper you buy, wherever you bought, that’s the impression you got. And I learned that all through life, no matter you hear people telling you what’s on the news, they’re telling you that’s what they got from that particular service that they used, you know. Most of our local newspaper is Associated Press, which is American, which is always very biased, American. And so it was in the war.

I was there six months. I put on a lot of weight because there was no rationing of course in southern Ireland, everything you wanted was there, chocolate. But you had to live a lonely life because you didn’t dare get involved with anybody. And it was funny, I used to go past the German embassy for my lunch and supper, it was a little house where they fed me and they never asked any questions. It was just around the corner from the German embassy. I’d have to walk pass it every day, little things like that, you know.

I was lonely. I used to go out mainly to eat, find some nice place to eat and I caught variety shows but I was on my own. I didn’t make any attachments. When it comes to girls, I didn’t know how to do that anyway. So that was for six months I was pretty well isolated but I was well paid. I was paid civilian service wages, about four times what I’d get in the air force. Unfortunately, I couldn’t put it in the bank but bring it home. So. And then I got called back until … time was up and I got relieved and I went up to Dundalk and then across by train into Belfast, to find my air force uniform which was waiting for me; I was supposed to change into my air force uniform and come home normally as if I was a serviceman on the ferry. But when I got to this little gun pit it was, it was a Boer Force gun pit, Royal Air Force Regiment, and when I got my uniform, it had been stored badly, it was all mouldy, didn’t fit me, I was two stones [12.7 kilograms] bigger and so I had to go home in civilian clothing and leave the uniform there to rot. And of course, when I got up to the boat, I had a man who gave me wrong documents. The officer, he posted me to the place where the boat docked. I didn’t know that. I thought I was going to “RAF Heysham” but when I got there, that’s where the boat docked. And when I asked at Heysham where the boat docked, where the station was, the next thing, I was on a train with a couple of policemen, wound up in the nick [jail]. So I was in there for about four days until they sorted out who I was and I had to be careful about it. And that was quite an episode.