"And when you think that, with your flying equipment on and the Mae West and a parachute, it was pretty cramped quarters."

"And when you think that, with your flying equipment on and the Mae West and a parachute, it was pretty cramped quarters." See below for Mr. McVean's entire testimony. Please be advised that Memory Project primary sources may deal with personal testimony that reflect the speaker’s recollections and interpretations of events. Individual testimony does not necessarily reflect the views of the Memory Project and Historica Canada. 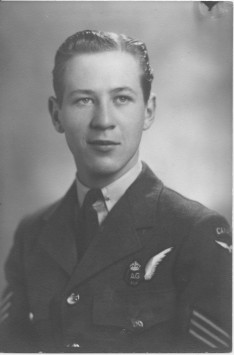 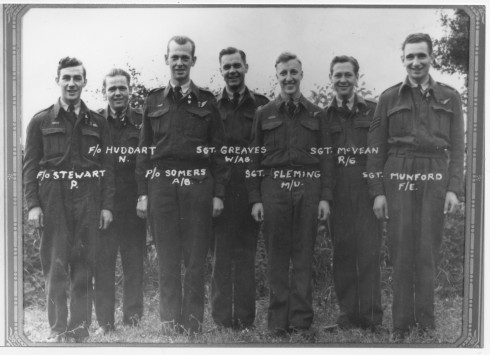 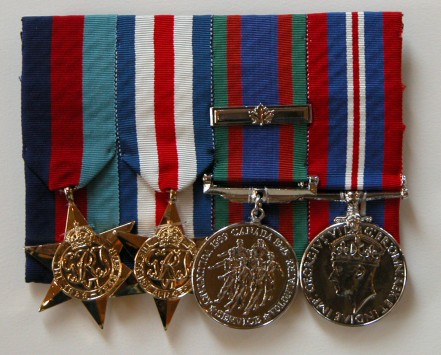 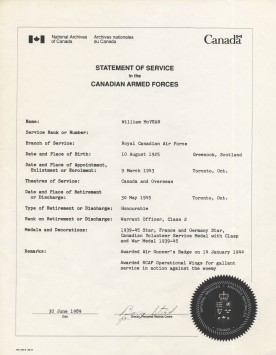 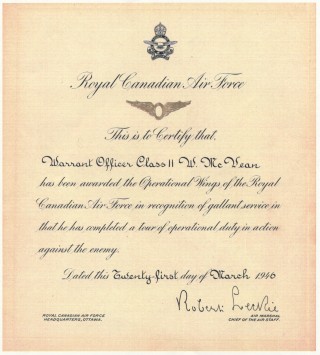 My name is Bill McVean. I'm a veteran of the Second World War. I served in the Royal Canadian Air Force and was a Warrant Officer, 2nd Class. I joined the Air Force on March 9, 1943. I was seventeen years old. I was born in Scotland but came to Canada when I was ten months old. Early in the War, the Germans bombed the town I was born in. It was a shipbuilding town and they were actually bombing the shipyards but, it hit the town and the hills above the town. And I decided then that, when old enough, I would try and join the services. I was a tail gunner. Our squadron had what they called, a mid under gun position. A fifty-calibre machine gun mounted in the belly of the plane. My first private office, as I call it, was very small. And when you think that, with your flying equipment on and the Mae West and a parachute, it was pretty cramped quarters. That was the life jacket. And when you inflated it, you looked like Mae West. I had four guns, two on each side. It was very cramped and very cold. Because we would be flying at eighteen to twenty thousand feet and as a rule, it was thirty, forty, forty-five below zero. Icicles would form on the oxygen mask, you had to break them off. Once we were up at height, we would probably have maybe six hours at that kind of a temperature. Now we did have an electric flying suit. The tail gunner was the coldest location. Up front they did have heat. I had a... an electric suit but they weren't really all that efficient because they tended to short out so you would get all the heat down one side and... and it would be too hot. So most of the time I ended up turning it off. The Germans would have a fighter, possibly that you could spot, hoping you would fire on them. As soon as you fired on him, there would be one in the dark side of the sky that would come in and hit you in a blind spot. So quite often, unless he would actually attack, you wouldn't try and fire your guns. As a rule, or quite often, they flew in pairs. We had a young chap fly with us, his first operation. And it happened to be a daylight operation. We were hit by Flak over - that was anti-aircraft fire - over the target. And he took a piece of shrapnel and he died the next day. He arrived on our airfield with crew. New gunner were put into the mid under gun position. They filled that, sort of, as a spare gunner. And sadly, he never did fly with his crew.