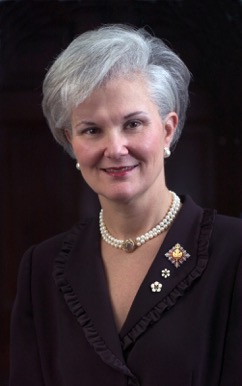 The Honourable Myra A. Freeman, former lieutenant-governor of Nova Scotia (2000 to 2006).

Myra A. Freeman (née Holtzman), philanthropist, lieutenant-governor of Nova Scotia (born at Saint John, NB 1949). Myra Freeman's distinguished record of community service began during her childhood in Saint John. Freeman played a leadership role in the Girl Guides of Canada and in youth groups at the synagogue. At 15 she instructed an arts and crafts course at the YWCA. She went on to serve on numerous boards and foundations, including the Nova Scotia Talent Trust Fund, the Nova Scotia Division of the Duke of Edinburgh Awards, the Atlantic Theatre Festival Foundation, the Grace Maternity Hospital Foundation, the Citizens Advisory Committee to Maritime Broadcasting System Limited, the Canadian Health Care Consulting Services Limited, the Kidney Foundation of Nova Scotia, the Canadian Jewish Congress, the CRB Foundation Gift of Israel program and the Historica Foundation. As lieutenant-governor she was Honorary Patron of more than 70 not-for-profit organizations.

Myra Freeman's lifelong commitment to community service, particularly youth-related issues, is also reflected in her choice of profession. She earned a Bachelor of Arts degree in 1970 and a Bachelor of Education in 1971 at Dalhousie University, Halifax, and went on to distinguish herself as a successful elementary school teacher in the Halifax district school system.

Myra Freeman was the 30th lieutenant-governor of Nova Scotia, and the first woman to receive this honour. She was sworn in on 17 May 2000. She succeeded John James KINLEY, who served from 23 June 1994, and served until 2006 when she was succeeded by Mayann FRANCIS. She is the current president of the Historica Foundation Advisory Council.

Numerous awards have been bestowed on Myra Freeman for her philanthropic endeavours and contributions to public life. In 2000 she was appointed Dame of Justice and Vice Prior of the Order of the Hospital of Saint John of Jerusalem, and she received the Canadian Corps of Commissionaires' Distinguished Service Medal in 2001. In 2002 she was appointed first chancellor and first recipient of the ORDER OF NOVA SCOTIA. In 2003 she received the Queen's Golden Jubilee Medal and was appointed the first Honorary Navy Captain in the Canadian Forces. In 2004 she was recognized by the Richard Ivey School of Business and Women's Executive Network as a "Trailblazer" and one of 100 Outstanding Canadian Women. She has been granted honorary degrees from Mount Saint Vincent University (2004, Doctor of Humane Letters), Cape Breton University (2005, Doctor of Laws), Acadia University (2007, Doctor of Civil Laws) and St Francis Xavier University (2008, Doctor of Laws). In 2008 she was appointed a Member of the ORDER OF CANADA.