View of Tsiigehtchic from the Dempster Highway during the summer of 1993, with the three hollows called Deetrin' ehchįį k'yit, the Crow beds, below and to the right of the church. This is where Crow, also known as Raven, had his camp during the days when people and animals could talk to each other and change form. The story of how Crow lost his beak and tricked the people to get it back occurred here.

Nagwichoonjik has played an important role in Gwichya Gwich'in everyday life, in both a practical and a spiritual sense, for thousands of years. As Gwichya Gwich'in Elder Gabe Andre explains, Nagwichoonjik "is like a highway for us," serving as a trail to access the many different resources along the river, and to other areas in the interior. It has brought neighbours together, sometimes in trade and social gatherings and at other times in not so friendly ways. It has also served as an anchor for many of the stories that provide an insight into Gwich'in culture and history reaching back in time to the adventures of Raven, when people and animals were equal and could change their form. The major theme of all these stories is that the people and the land, including the river, are interdependent. Nagwichoonjik, which forms the backbone of Gwichya Gwich'in traditional lands, has shaped their culture and history and is part of a prominent cultural landscape within Gwichya Gwich'in lands. 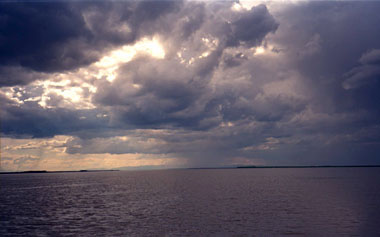 Srehtadhadląįį is the gateway into the Mackenzie Delta. This is where Nagwichoonjik opens up for a distance of almost five km and separates into three channels. On official maps, this place is known as Point Separation..
(courtesy Ingrid Kritsch, Gwich'in Social and Cultural Institute)

The Nagwichoonjik National Historic Site was designated in 1997 as an Aboriginal Cultural Landscape. It includes a 175 km stretch of the Mackenzie River from Vihtr'ii Tshik (Thunder River) to Srehtadhadlâîî (Point Separation), making it the largest National Historic Site in Canada. The boundaries of the site reach 5 km inland from the river to ensure that all the major archaeological and cultural sites affiliated with it are included. The Gwich'in Tribal Council, in cooperation with land management agencies of the federal and territorial governments, manages the site.

The Gwichya Gwich'in brought this cultural landscape forward for recognition as a National Historic Site to promote and celebrate their culture and history with their children and visitors. The site centres around 50 named places with stories attached for many of the hills, creeks, rivers, camps, burial places and sacred sites along Nagwichoonjik. The stories associated with these places range in age from the earliest times of Gwich'in history to present-day camps and cabin sites where old traditions, storytelling, knowledge and cultural skills are still practised. Hunting, fishing and the gathering of plants and berries within Nagwichoonjik continue to be important activities carried out in family groups. Other sites within this cultural landscape include pre-contact archaeological sites in the form of fish camps, trails, graves and a lithic quarry workshop where raw material for making stone tools were collected. Historical visits by explorers Alexander Mackenzie and John Franklin, remains of fur trading posts and the old Arctic Red community site where one of the earliest Roman Catholic missions in the Gwich'in area was built in 1883 all contribute to the historical context of Nagwichoonjik. 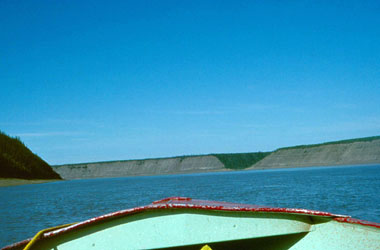 Travelling through Sruh Chihvyah K'yit (Coney Bay), a narrowing of Nagwichoonjik which acts like a wind tunnel when winds blow from the north and is notorious for its big waves. Chidaltąįį, on the right shore, is where Rosa Andre has her summer fish camp, one of the many fishing places along the river and a trailhead into the interior, summer 1992.
(courtesy Ingrid Kritsch, Gwich'in Social and Cultural Institute)