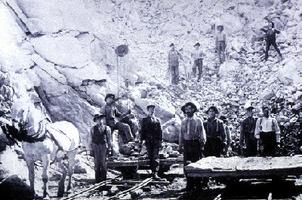 The National Transcontinental Railway (NTR) was a government-built railway from Winnipeg, via Sioux Lookout, Kapuskasing, Cochrane and Québec City, to Moncton. In October 1903 the government of Sir Wilfrid LAURIER committed itself to the construction of a third transcontinental railway, despite the existence of the CANADIAN PACIFIC RAILWAY and the CANADIAN NORTHERN RAILWAY. Its purpose was to provide western Canada with direct rail connection to Canadian Atlantic ports, and to open up and develop the northern frontiers of Ontario and Québec.

The NTR's development was rooted in the power play between railway entrepreneurs and politicians of the early twentieth century. Visions of the grain-rich West expanding with new settlers and industries prompted Prime Minister, Sir Wilfrid Laurier to commit the government to the expensive but potentially profitable enterprise. Laurier also believed that healthy competition would force the CPR to lower freight rates, thus pleasing Western shippers, who would contribute to healthy competition between railways. He persuaded the GRAND TRUNK RAILWAY (GTR), under the leadership of Charles HAYS, to take part in western railway expansion with the assistance of the Canadian Northern Railway. But mutual jealousies precluded logical co-operation between the GTR and Canadian Northern, and, realizing its importance to national development, the federal government opted to build part of the line itself. The GTR's subsidiary, the GRAND TRUNK PACIFIC RAILWAY (GTPR) Company, would build the western section (Winnipeg to the Pacific), while the government itself would build the eastern section (Winnipeg to Moncton) and eventually turn it over to the GTPR for operation.

In 1903, Laurier's government enacted the Railway Act, allowing the project's construction. The Act specified the establishment of the Board of Railway Commissioners, the precursor to the CANADIAN TRANSPORTATION AGENCY, which would oversee the project. Yet, the commissioners faced a daunting task. The significant cost overruns of the railway's construction opened Laurier's Liberals to public scrutiny, subsequently leading to their downfall in 1911. The task was left to Robert BORDEN's Tories to finish.

Despite substantial problems with both administration and cost, the last spike was driven on 17 November 1913, completing the eastern section except for the QUÉBEC BRIDGE. The NTR was never incorporated and the financial problems of the GTPR prevented it from taking over the NTR as agreed. It remained under government management until 1918, when operations were entrusted to the recently nationalized Canadian Northern Railway. In 1923 it became a part of the CANADIAN NATIONAL RAILWAYS.