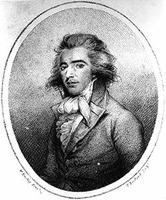 In 1788 Meares sailed with two ships to Nootka,BC where he built a temporary trading post (courtesy PABC/PDP 5179).
PreviousNext

Nootka Sound, BC, is an inlet on Vancouver Island's western coast, 270 km northwest of Victoria. From a cluster of forested islands near the mouth of the sound, three deep inlets (Tahsis, Tlupana and Muchalat) penetrate inland. One of these reaches 65 km inland to Strathcona Provincial Park, another to the sawmilling community of Tahsis.

The first inhabitants of the region were the Nuu-chah-nulth (Nootka), who made their living by hunting and fishing. They were the only Indigenous people in Canada to specialize in whaling and were the first in BC to meet Europeans. The coastal environment was particularly bountiful in fish of many varieties, and the semisedentary Nuu-chah-nulth developed an elaborate culture.

The sound was likely first explored by James Cook in 1778, although Peréz Hernandez had approached it 4 years earlier. Cook first called the inlet King George's Sound, then Nootka Sound, thinking this was its Indigenous name. Soon after, the region became a centre of trade and then of competition among Russia, Britain and Spain. In 1789 a Spanish force occupied the sound and built a fort; 2 months later a British force arrived and a quarrel developed. In the ensuing Nootka Sound Controversy, Spain eventually agreed to a convention (1794) according to which both nations were free to navigate and fish in the Pacific, to trade and establish settlements. At first the Nuu-chah-nulth prospered from the sea-otter fur trade that followed European explorations, but the introduction of diseases such as smallpox virtually wiped them out.

The main Indigenous settlement at Yuquot ("windy place") is still important for the remaining Nuu-chah-nulth, many of whom work in pulp mills at Gold River and Campbell River.