Normand Hudon, caricaturist, painter, fantasist (b at Montréal 5 June 1929, d at Montréal 8 Jan 1997). After his studies at École des beaux-arts de Montréal, he lived in Paris, then made a flamboyant entry as a caricaturist and fantasist when television came to Montréal in the early 1950s; the series "Ma Ligne maligne," with Robert Lapalme, stamped the age with its vivacity. At the same time, Hudon was showing his paintings and drawings in galleries and was becoming one of the most biting caricaturists. On 9 July 1965 he designed a cover for Time magazine and that year also prepared a huge composition for a pavilion at Expo 67. After a more difficult period, he began working seriously again (1972) and in a few years had completed a body of work which treated, with tender irony, certain aspects of the Québec heritage: nuns on bicycles or priests on skates, mischievous children or picturesque villages, tip-tilted houses or shops, and court scenes that could rival those of Daumier. 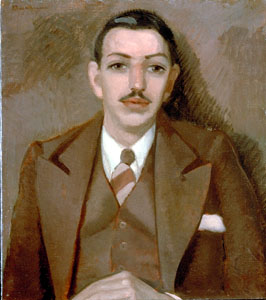