While it may seem odd for a businessman to criticize austerity measures by a Conservative government, equally unusual was the size and scope of Eves's cost-cutting program. The financial statement, which slashed $6.

This article was originally published in Maclean's Magazine on December 11, 1995

While it may seem odd for a businessman to criticize austerity measures by a Conservative government, equally unusual was the size and scope of Eves's cost-cutting program. The financial statement, which slashed $6.This article was originally published in Maclean's Magazine on December 11, 1995 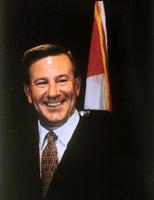 Douglas Hume is a living example of the pioneering spirit of Ontario's resource economy. While most of the province's larger mining companies long ago abandoned their home base to spend millions of dollars developing properties in faraway places like South America, Hume's company stuck it out and survived as one of the few players in the high-risk game of mineral exploration in Ontario. It has done so with considerable help from the provincial government. In the past two years, Hume's Toronto-based Nuinsco Resources Ltd. received $500,000 worth of provincial grants to explore and develop deposits - funds that played a role in a major nickel discovery earlier this year near Rainy River in far western Ontario. But that kind of support is about to run out. Last week, Ontario Finance Minister Ernie Eves unveiled a mini-budget with sweeping cuts, including the end of $230 million in what he called "handouts to business" - and the programs that delivered Hume's grants. "Just pulling the plug on this and saying goodbye is not in the best interests of the province," declared Hume. "The end is almost nigh for mining exploration in Ontario."

While it may seem odd for a businessman to criticize austerity measures by a Conservative government, equally unusual was the size and scope of Eves's cost-cutting program. The financial statement, which slashed $6.3 billion from the province's $56-billion budget over three years, is the boldest move yet by Ontario's Conservative government, and one of the most aggressive deficit-reduction programs in the country. It will effect daily life from Kenora to Cornwall, from raising the cost for a community hockey team to rent the local rink, to reducing hospital facilities and the number of grants available to poets and film-makers.

The measures stem from the campaign platform that swept the Tories into office on June 8. They hammered away at three key themes: reducing provincial welfare benefits; cutting personal income taxes by 30 per cent, or by $4 billion; and balancing the budget by eliminating $6 billion in government spending.

That final figure has expanded because the province's deficit turned out to be higher than expected: last week's spending reductions were in addition to $1.9 billion Eves already slashed in June - including a 21.6-per-cent cut in provincial welfare rates. The 49-year-old finance minister, a lawyer from Parry Sound who is Premier Mike Harris's closest friend in the government, insisted last week that he would balance Ontario's budget by the fiscal year 2000-2001. But he did so without taking into account the loss of government revenue from the promised 30-per-cent cut in provincial income tax rates, now estimated as high as $5 billion. While Eves said the timing of the tax cut will be announced in next spring's full budget, he made it clear that that measure, along with balancing the budget, was central to the government's plan for stimulating Canada's largest provincial economy. "There is no issue more important to this government than job creation," Eves told reporters.

But last week's plan will do little for the unemployed in the near future. The government's own forecasts predict that Ontario's unemployment rate will remain high, dipping slightly to 8.6 per cent in 1997 from the current 8.9-per-cent rate. Opposition leaders seized on that point, but reserved most of their scorn for cuts to health care. The Tory mini-budget mandates an 18-per-cent reduction over the next two years to the $7.2 billion that the province's 219 hospitals currently receive, a move that health-care officials say will force dozens of hospitals to merge or close. As well, the document introduces user fees similar to those in existence in other provinces for the Ontario Drug Benefit plan, which, up to now, had offered free prescription drugs to senior citizens and welfare recipients. That appears to violate Harris's campaign promise not to touch health care, which prompted Liberal Leader Lyn McLeod to call the premier "a liar" several times last week.

Now, seniors whose annual family income is greater than $24,000 will have to pay an annual $100 deductible for their drugs, a fee of $2 for each prescription as well as the pharmacist's dispensing fee, which is normally about $6. "It's pretty heavy stuff for some people," said pharmacist Claudio Cavaliere, who dispenses drugs in a working-class neighborhood of Sault Ste. Marie. "I have some customers who will be paying $300 to $400 more out of their pocket each year."

1) The province will re-duce funding to municipalities from the current $1.29 billion to $736 million over the next two years, and allow local governments to charge user fees for everything from library services to garbage pickup. Peter Robertson, mayor of the fast-growing city of Brampton, says that his jurisdiction will make ends meet by doing things like raising rental fees for ice rinks and lowering the wattage of bulbs used in traffic lights. "We've been cutting for four years because the provincial government keeps passing their bills to us," complains Robertson.

2) Public school boards and postsecondary institutions will lose $800 million in funding next year, much of which the government says can be recovered by cutting administrative costs. The formula means that the University of Toronto alone will lose up to $40 million in funds. But universities will now be allowed to raise tuition fees by up to 20 per cent, and community colleges, 15 per cent.

3) Casino development will be permitted in Niagara Falls, and the government will hold a provincewide referendum on whether casinos should be built elsewhere.

At the same time, Eves took a whack at cultural institutions, slashing provincial support for museums, art galleries and the $38-million Ontario Arts Council, an agency that distributes grants to writers, film-makers, dancers and other artists. Some nervous observers actually expected the Tories to go further and eliminate the council entirely, as well as the ministry of citizenship, culture and recreation, whose current budget is $403 million. That the government failed to do so was small solace to the 32 employees at CJRT FM, a unique radio station in Toronto that offers a mix of classical and jazz programming alongside university courses in topics such as international relations and management, through a division called Open College. Eves announced that CJRT, which is the only radio outlet in North America that produces and broadcasts university credit courses, would lose its entire $1.3-million provincial subsidy, 40 per cent of the station's operating budget. While managers were stunned by the cut, they vowed to keep the station running beyond next year by appealing to listeners for donations.

Jettisoning the radio station seemed even more puzzling given that the Tories left a much larger provincially funded media organization unscathed. TVO, a Crown-owned television network with a staff of 480 people, consumes $60 million in provincial funds annually, and has long been the subject of complaints among Tories that its programming reflects the concerns of downtown Toronto's chattering classes rather than those of the province as a whole. "With CJRT it was just a matter of not sending a cheque," explained a senior Conservative official. "But we own TVO and we have union agreements that prevent us from putting it on the chopping block."

The Tory official added that the government's strategy is to deal with TVO next fall, after getting more controversial measures like last week's cuts out of the way first. If the government can get a good price for TVO, the network will join an array of other Crown assets on the auction block. The Tories are anxious to generate profits from privatization so they can offset the revenues lost because of the promised tax cut. If the Conservatives fail to sell off significant assets, they will be forced to subject a beleaguered Ontario public to further cuts in government services in order to keep the tax-cut promise and maintain the commitment to balance the budget.

Already, the government's actions on other fronts have provoked a wide array of groups. Last month, the Tories angered unions when they introduced legislation repealing an NDP labor law that banned the hiring of replacement workers during strikes and strengthened worker rights. Days later, the government provoked tenants' organizations by announcing that it would end rent control in the province next year, and make it easier for landlords to evict renters. As Harris and his colleagues have offended more and more groups, the Queen's Park legislature has become the scene of almost weekly protests.

But one recent demonstration left many Tories amused, rather than worried. Five days before Eves's mini-budget, thousands of day-care workers, parents and children descended on Queen's Park waving placards with slogans like, "Mike Harris: pick on someone your own size." They said they were there to protest planned Tory cuts to the $550 million the province spends on annual day care subsidies. "They [the Tories] won't get away with it," New Democrat MPP Marilyn Churley declared at the rally. The irony is that no cuts were under discussion at the time by the Harris government, nor were any announced last week. "We're sorry if we've disappointed the people who were expecting those cuts," Eves remarked wryly to reporters on the day of his mini-budget. Later, a bemused senior Tory said, "These people got themselves worked up, screaming and yelling on the front steps of Queen's Park, for nothing. They've been doing the best Chicken Little imitation of anyone, and the sky has not fallen." While the sky did not fall for the day care sector, it may still for some Ontarians when hospitals, schools and cities decide which services to axe as they grapple with the full impact of the Harris government's crusade to cut spending.