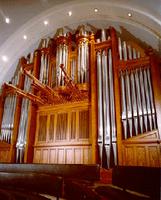 The sound of an organ was first heard in a Québec church in 1660-61, some 60 years ahead of our American neighbours. Records show that 2 organs were in use in Québec Cathedral by 1663-64. It is likely that the organ compositions used at the time were, as in most French organ literature, short and clearly divided into sections. This facilitated the French alternatim practice of interspersing the organ pieces with chanted passages sung by the choir. The recently discovered Livre d'orgue de Montréal (repr 1981), brought to Québec in 1724 by Jean Girard (1696-1765), suggests that this French tradition was an accepted and well-established part of liturgical life in New France.

The monumental English influence was Healey WILLAN who came to Canada in 1913. His renowned Introduction, Passacaglia and Fugue (1916) set a Canadian standard for original organ compositions and his music for church use led to an exhaustive list of practical compositions for amateur church organists, based primarily on hymn tunes. Stemming from this English tradition, a number of fine original and practical compositions have been added to the body of Canadian organ works. Notable Anglo-Canadian composers include Gerhard Wuensch, Gerald Bales, Barrie Cabena, Derek Healy, Bengt HAMBRAEUS, Gerhard Krapf and Jacobus Kloppers.

All of the early organs in 17th-century New France were small, imported from Europe, and reflected the liturgical demands of the time. This pattern of importing French-style instruments remained undisturbed except for one Canadian-built organ completed in 1723 by a young Montréal carpenter, Paul-Raymond Jourdain, which was apparently his first and last instrument. The English influence in organ building began in 1786 when an instrument, or at least an addition to an existing organ, was imported for St Paul's Church in Halifax. Several imported organs followed, but by 1824 the work of a French emigrant, Jean-Baptiste Jacotel, had established a Canadian tradition of organ building. The first Canadian-born builder was Joseph Casavant (1807-74) whose sons, Claver and Samuel, established CASAVANT FRÉRES LTEÉ, still one of Canada's leading organ builders. Other notable 19th- and early 20th-century builders included Samuel Russell Warren, Louis Mitchel, and Napoléon Déry, whose work in Québec was to be a strong impetus for the organ revival movement in Canada.

All of the early builders relied on the traditional mechanical or tracker-action method of construction for their organs but, by the late 19th century, organs that made use of electric action in one way or another soon took over in the marketplace. From 1893 on, the Casavant brothers devoted themselves to the development of an electro-pneumatic organ design; the last tracker-action instrument built by Casavant Frères for more than 60 years was completed in 1902.

The organ reform movement, which sought to restore traditional methods of organ building (mechanical or tracker-action) and encouraged a revival of the organ's baroque sound, began in Germany shortly after WWI but did not reach Canada until mid-century. In 1959 the first new tracker-action organ, built by Rudolf von Beckerath of Germany, was installed in Montréal. Spurred by this first new revival organ, a few dedicated Québec organists formed a group in 1960 known as Ars Organi to further the performance of organ literature on the best examples of tracker-action organs. Largely through their efforts, Casavant Frères began building tracker-action organs again in 1963. A number of important small firms devoted to building tracker-action instruments after the ideals of the organ reform movement have emerged. Among the best known are organ builders Hellmuth Wolff, André Guibault, Guy Thérien, Karl Wilhelm, Fernand Létourneau, Gerhard Brunzema (deceased 1992), Adrian Koppejan, Gabriel Kney (retired 1996), Denis Juget, Halbert Gober and K. Leslie Smith. Modelled on solid historical foundations, Canadian organ builders today hold a reputation that rivals the best in the world.