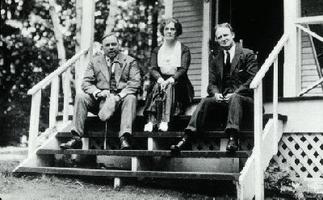 Skelton was Mackenzie King's top civil service adviser on foreign and domestic affairs. He is shown here on the right with King and King's sister at Kingsmere (courtesy Library and Archives Canada).

Oscar Douglas Skelton, academic, public servant (b at Orangeville, Ont 13 July 1878; d at Ottawa 28 Jan 1941). After a brilliant student career in classics at Queen's, Skelton graduated in 1908 from the U of Chicago with a PhD in political economy. He returned to Queen's, where he was John A. Macdonald Professor of Political Science and Economics, 1909-25, and dean of arts, 1919-25. Skelton was a dedicated, popular teacher and he published widely on economics and history as well as current affairs. A liberal democrat and an uncompromising nationalist who believed Canada must take control of its own affairs, he worked for the LIBERAL PARTY as early as the election of 1911 and was close to Sir Wilfrid LAURIER in his last years. Mackenzie KING engaged him as a foreign-policy consultant after winning the election of 1921, and appointed him undersecretary of state for external affairs in 1925. He held the position until his death, serving King and also Conservative PM R.B. BENNETT. Although unassuming and unaffected and not a strong administrator, Skelton was the leading civil servant of his time, with a finger in every bureaucratic pie: a key adviser on domestic as well as foreign policy, the founder of the modern Department of FOREIGN AFFAIRS AND INTERNATIONAL TRADE (formerly External Affairs), and an architect of the Canadian public service. His major publications were Socialism: A Critical Analysis (1911), Life and Times of Sir Alexander Tilloch Galt (1920), Life and Letters of Sir Wilfrid Laurier (2 vols, 1921) and Our Generation, Its Gains and Losses (1938).