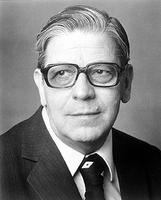 Oskar Morawetz, composer (b at Svetla, Czechoslovakia 17 Jan 1917; d at Toronto 13 June 2007). Recognized as a leading composer from the mid-1940s when he won national awards for his first 2 compositions in 1944-45, Morawetz remained one of Canada's most frequently performed composers. He came to Canada in 1940 and studied at U of T; in composition, however, he was self-taught. Romantic by temperament, he always endeavoured to write music that was immediately accessible to the mind as well as the emotions.

Lyrical melody, lively rhythm, secure polyphony and innovative exploitation of instrumental colour were hallmarks of his style. Graceful works in a happy vein, such as Carnival Overture (1946) and Overture to a Fairy Tale (1956), are typical of Morawetz's early music. Among his best known and most highly regarded compositions are Piano Concerto No 1 (premiered by Zubin Mehta with Anton KUERTI 1963), Sinfonietta for Winds and Percussion (selected in 1966 for the Critics Award, Cava dei Trirena, Italy), Memorial to Martin Luther King (solo cello and orchestra of winds, piano and percussion, commissioned by Mstislav Rostropovich, 1968), From the Diary of Anne Frank (soprano and orchestra, 1970) and Psalm 22 (voice and orchestra, premiered by Maureen FORRESTER, 1984). His Concerto for Harp and Chamber Orchestra won a Juno Award in 1989 for best Canadian classical composition. The Concerto for Clarinet and Chamber Orchestra (1989) was premiered in Leningrad (St Petersburg). His moving Prayer for Freedom (1994) commissioned by the Elmer Iseler Singers was based on 2 anti-slavery poems by Frances E. W. Harper. A constant element of Morawetz's output was his recognition of the importance of the past informing the present. Several of his major works were concerned with contemporary tragedies. His late works revealed an increased economy of means and a tendency towards thinner textures.

Some of his shorter works have become standard repertoire internationally. In 1983 the CBC issued a recorded anthology of his music, and subsequent recordings of his music have been released by Marquis, Centrediscs and EMI. In 1987 he became the first composer to be awarded the Order of Ontario. More than 130 orchestras, led by such conductors as Vladimir Ashkenazy, Kurt Masur, Andrew Davis, Charles Dutoit, Rafael Kubelik, Charles Mackerras and William Steinberg have performed his works. Morawetz received the Order of Canada in 1989 for his outstanding contribution to Canadian music. In 1998 he received an honorary diploma from the ROYAL CONSERVATORY OF MUSIC and four years later the Queen's Jubilee Medal. The Morawetz portrait in the Canadian Composers Portraits series was released in 2002.