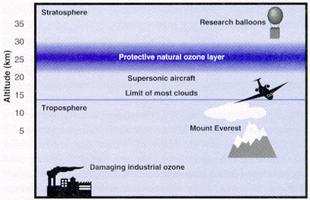 The ozone layer, or ozonosphere, is a region of the atmosphere containing the highest concentration of ozone gas (O3). On average, it is located at an altitude of about 25 km (range 10-50 km), but is higher near the equator and lower near the poles. Maximum ozone concentration in the ozonosphere rarely exceeds a few molecules per million molecules of air; the average concentration in the entire atmosphere is even smaller. The average thickness is about 3mm, with the smallest total amounts of ozone found over the equator and the largest over the poles in winter.

The development of the ozone layer is thought to have been a significant factor permitting the evolution of life on Earth. Ozone is the main atmospheric gas that absorbs the biologically damaging part of the sun's ultraviolet radiation (UV radiation), known as UV-B (ultraviolet-biologically active). The small fraction that reaches the Earth's surface causes sunburn and is implicated in skin cancer, eye damage and suppression of the human immune system. UV-B radiation also reduces crop yields and affects the phytoplankton in the ocean food cycle.

Atmospheric ozone influences climate in 2 ways. First, since ozone also absorbs infrared solar radiation, it contributes to GLOBAL WARMING. Second, chemical processes which produce the ozone layer also heat the stratosphere, where the layer occurs. This heating, in turn, affects the temperature and radiation balance of the lower atmosphere and the Earth's surface. Ozone concentrations may increase locally, in the lower atmosphere, especially in smog, as a byproduct of chemical reactions.

In 1985 it was confirmed that, since the 1970s, a hole in the ozone layer has been developing above the south pole. This OZONE DEPLETION was confirmed over the north pole in 1989. Chlorofluorocarbons, or CFCs (once used in air conditioning, aerosol spray cans, refrigerators and plastic foam products), halons (fire protection systems) and bromine compounds (still used in certain agricultural chemicals) are all ozone-depleting substances. Their use is now either prohibited or being phased out in Canada and other developed countries.