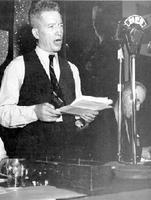 In 1940 when the Candian Congress of Labour was founded, Conroy became its vice-president and the next year its full-time secretary-treasurer (courtesy Library and Archives Canada/PA-120719).

Pat Conroy, labour leader (b at Baillieston, Scot 1900; d at Ottawa 8 Apr 1988). Conroy began to work as a miner at 13 and joined the British Mineworkers' Federation. In 1919 he immigrated to Canada, settling in Drumheller, Alta. He worked in the coal mines and joined the United Mine Workers of America. After a tour of the US, he returned to Alberta and from 1922 held several union positions until he became vice-president of the Western Canadian District 18.

In 1940 when the Canadian Congress of Labour (CCL) was founded, he became its vice-president and the next year its full-time secretary-treasurer. In 1949 he helped found the International Confederation of Free Trade Unions. In 1951 he suddenly resigned from the CCL position because of differences with his colleagues on the executive. As a dynamic leader, he wished the congress to play a larger role. In 1952 he was appointed labour attaché to the Canadian embassy in Washington, a post he held until his retirement in 1972.