This image shows periosteal inflammation on the anterior surface of a tibia found at the Kleinburg Ossurary (courtesy M. Anne Katzenberg). 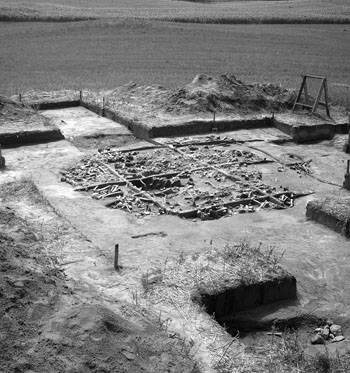 The Kleinburg Ossuary near Kleinburg, Ontario (1970). The upper layer of soil has been removed and the first glimpse of the remains of a Late Ontario Iroquois \u0093Feast of the Dead\u0094 is visible (ca. A.D. 1600-1630). In the past, many physical anthropologists worked at sites similar to this one (courtesy F. J. Melbye).
PreviousNext

Physical anthropology or its more modern synonym, biological anthropology, is the study of the natural history of human species. Accordingly, the major focus of the field is on problems of human evolution, adaptation and variation. The foundations of modern physical anthropology, like those of modern biology, rest on neo-Darwinian evolutionary theory, which provides the common background for a diverse discipline that lacks a common set of methods. Physical anthropologists recognize that interaction between human culture and human biology has shaped and maintained our species, and that full understanding of this process requires consideration of both biology and culture. Reflecting this interdisciplinary concern, most Canadian physical anthropologists work in university departments of anthropology. Many, however, are employed in departments of anatomy, archaeology, dentistry, human kinetics and zoology, as well as in Museums.

Human biological history is most directly told by the fossil record. Although early hominid remains (fossils in the human line) are not found in the Western Hemisphere, Canadians have contributed significantly to paleontology. Foremost was Davidson Black, who studied and named the fossils called "Peking Man" (Sinanthropus pekinensis = Homo erectus pekinensis). Studies on nonhuman primates (prosimians, monkeys, apes) have ranged from the earliest fossils to the living. Paleoanthropological research has focussed primarily on great ape origins. Studies of nonhuman primate behaviour provide insights about factors that produce and maintain sociality - for example, why different sexes and different ages form year-round social groups. Such studies can also provide inferences about behaviours that may have been present in species from which nonhuman primates and humans are descended.

The largest contribution of physical anthropologists in Canada since 1871 has been in human osteology. Descriptions of the size and shape of skeletons of archaic and prehistoric Inuit and other indigenous peoples have been superseded by analyses of past population distributions, assessments of group composition by age and sex, and determination of contemporary and earlier population relationships. The effects of nutrition, diseases, climate, culture and genetics on past populations, including European settlers, are routinely investigated with techniques borrowed from biochemistry, pathology, epidemiology, demography, radiology and statistics. Analyses of ancient DNA of both humans and the animals on which their sustenance depended are increasingly undertaken within laboratories of physical anthropology. By 2005, such capability existed at Simon Fraser University, McMaster University and the University of Western Ontario.

Studies of living peoples have included assessment of cold adaptation in indigenous groups, determination of adult body composition, and study of the growth and development of children. Physical anthropologists in Canada have made significant contributions to understanding the etiology of complex diseases, such as non-insulin dependent diabetes mellitus among Canadian indigenous peoples, and cardiovascular diseases in Inuit and related Siberians. The impacts of specific micro-evolutionary forces (genetic drift, gene flow) and social factors (eg, the effects of marriage patterns on the genetic features of populations) have been examined in groups as diverse as subarctic Indigenous peoples and Caribbean island isolates. The effect of gene flow on genetic relationships within Canadian indigenous populations and the demonstration of genetic linkages between Siberian, Canadian and other indigenous North American populations spurred investigations of the origins of the first peoples of the Americas, especially by geneticists outside Canada.

A strong cluster of physical anthropologists at the University of Calgary focus on primate behaviour, especially studies on social dominance, reproductive strategies and female life histories as well as the conservation of nonhuman primate species.