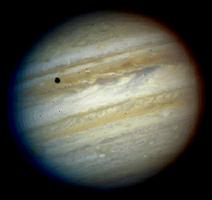 The planet Jupiter as seen from the Hubble Telescope. 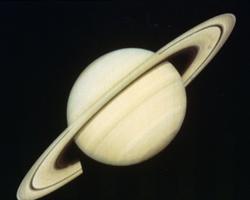 Planet Saturn and its numerous rings. One of the most fascinating planets of the solar system. NASA's Voyager 2 took this photograph of Saturn on 21 July 1981 (courtesy Canadian Space Agency).
PreviousNext

A planet is a nonluminous body that revolves in an orbit about a star; a satellite is a body that revolves about a planet. In our own solar system, these "worlds" range from Jupiter, nearly 145 000 km in diameter, to small lumps of rock less than 1 km across. Our knowledge of the physical and chemical nature of planets and satellites has increased very rapidly since the launching of the first interplanetary spacecraft in the early 1960s.

The diameter of a world is a significant value because, given the same densities, the surface gravity will vary roughly with the diameter. A diameter of 350 km is the approximate dividing line between the larger, near-spherical bodies and the smaller objects of irregular shape. Another important parameter is the average distance of the world from the SUN, as this distance controls the basic chemistry and conditions on the body's surface. Since the energy received from the sun falls off as the inverse square of the distance, the worlds in the outer part of the solar system are much colder and have retained more lightweight elements (eg, hydrogen, helium, carbon, nitrogen, oxygen) than have inner worlds. A high surface gravity also helps retain light gases; thus, large quantities of these elements and their compounds are found in the 4 largest planets, all of which are in the outer solar system.

These 4 planets probably have relatively small solid cores of ice and rock, but the gaseous atmospheres of cloud belts extend for thousands of kilometres and effectively prevent us from glimpsing any solid surface. At least 3 of the 4 have ring systems composed of countless, small (metre-sized) solid particles of stony material combined with ice. These particles revolve about the planet and tend to form discrete, narrow ringlets, apparently constrained by the dynamic action of certain bodies that are very much larger than the normal ring particles. These bodies have been called "shepherds."

The 4 planets of the inner solar system (Mercury, Venus, Earth, Mars) are very different from the large outer worlds, being significantly small with higher concentrations of heavier elements. Although described as terrestrial (ie, Earth-like), they are also very different from one another. Above a solid surface, their atmospheres range from effectively none, for Mercury, transparent with some clouds for Mars and Earth, to opaque clouds of carbon dioxide, sulphuric acid and chlorine compounds on Venus, where surface detail is mapped by radar or by a spacecraft landed on a furnace-like (400-500°C) terrain.

In the gap between the inner and the outer solar system move many minor planets, called asteroids. Over 3500 asteroids with well-determined orbits have been identified and given official reference numbers. Of these more than 2900 have been named. With a few exceptions, worlds smaller than 4000 km in diameter have no appreciable atmospheres as their surface gravities are too small to hold gas molecules for more than a few thousand years. The commonest features on the solid surfaces (as demonstrated primarily by photographs transmitted by spacecraft) are craters of widely differing sizes.

The observational evidence points to space impacts in the early eons of the solar system as the origin for most of these craters, but some outstanding examples, including features on Earth, Mars and Io, have been produced by volcanic action. Sulphur volcanoes are active on Io and currently active volcanic areas on Venus and Europa have been tentatively identified. A common constituent of many of the worlds in the outer solar system is ice of various compositions and Europa seems to be completely covered by ice, possibly to a depth of 10 or more kilometres in certain areas.

Several centuries of tradition have given us names from Greek-Roman mythology for the planets and satellites themselves except for the satellites of Uranus. This planet was first actually "discovered," an achievement of the English astronomer William Herschel in 1781. The currently known satellites of Uranus are now 15 in number, thanks to the records of Voyager 2 made in January 1986, and in this case all 15 have been named after fictitious characters in the writings of Shakespeare and Alexander Pope.

Standard cartography and nomenclature for the solid surfaces of recently explored worlds have proceeded rapidly, with consultation among the world's nations organized by the International Astronomical Union. Over 4500 topographic names have been approved on 26 different extraterrestrial worlds. After craters, the most frequently named features have been valleys, mountains, canyons, ridges and plains. Some 40 Latin terms are used to define the various categories of features. The Working Group for Planetary System Nomenclature has endeavoured to bequeath to the future some international elements of Earth's cultural heritage in the names we use on other worlds. Over the years, the names of deceased scholars and scientists have been placed on the Moon and Mars. Now we have outstanding individuals in the humanities (Beethoven, Shakespeare, Raphael) on Mercury; feminine names (Eve, Cleopatra, Pavlova, Nightingale) on Venus; and deities of fire and volcanoes (Ra, Pele, Surt, Amaterasu) on Io. Name sources for other worlds include terrestrial place names and many of the familiar legends and mythologies of the world. On Mars we have small craters called Hope, Chinook, Chapais and Nain, taken from towns in BC, Alberta, Québec and Newfoundland, respectively.