Port au Choix, NL, incorporated as a town in 1966, population 839 (2011c), 893 (2006c). The Town of Port au Choix is located on the west side of the Northern Peninsula. Its name derives from the Basque Portuichoa, "little port." Two major archaeological sites have been investigated at Port au Choix. The first, excavated during the 1950s, is a large site of Dorset culture dating between about 200 and 600 AD. It consists of a group of rectangular winter house remains and outdoor hearths suggesting year-round use. The many tools, weapons, ornaments and other objects were used to define "Newfoundland Dorset Culture," now thought to represent a variant of the more general Middle Dorset period in Newfoundland and Labrador. The second Port au Choix site was a large cemetery from which the Maritime archaic tradition was defined. The tools, weapons, religious and other objects discovered, along with more than 100 skeletal remains, indicate a people whose way of life was attuned to the coastal resources of Newfoundland between 2000 and 1200 BC. Port au Choix is the location of a national historic site (designated in 1970) commemorating Aboriginal occupations of the site. 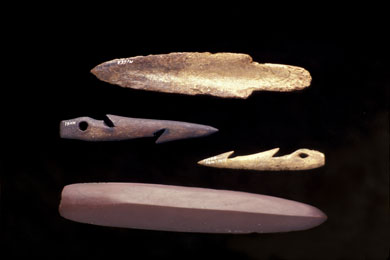 In recorded history, Port au Choix was a major Basque fishing station in the 1500s and an important French station on the French Shore from the 18th to the late 19th century, when the site was settled by Newfoundland and English fishermen who vigorously asserted their right to settlement on this disputed coast. The town is a fish-processing and fish-collecting centre that serves as a regional services centre.