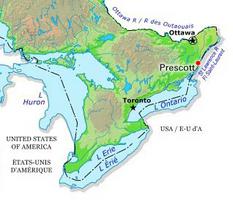 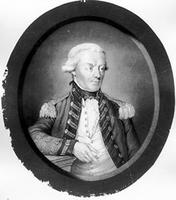 Prescott was noted for stubbornness and irascibility and spent only 3 years of his 10-year term in Canada. After a portrait by William Berczy (courtesy Metropolitan Toronto Reference Library/T31638).
PreviousNext

Prescott, Ont, incorporated as a town in 1834, population 4284 (2011c), 4180 (2006c). The Town of Prescott is located 18 kilometres east of Brockville on the St Lawrence River. The site was strategically located at the head of navigation above the former St Lawrence rapids (they were inundated during the building of the St Lawrence Seaway). The French built Fort de Lévis nearby in 1759-1760 to delay the British from attacking Montreal during the Seven Years' War. The battle here from 18-25 August 1760 was the last major engagement between British and French forces on Canadian soil.

Loyalists began settling in the area in 1784. Major Edward Jessup founded the town in 1810 on some of the land the British government granted him in return for his service. He named his community for Governor-in-Chief Robert Prescott.

The War of 1812 soon broke out and the first Fort Wellington was built here and used as the base for an attack on Ogdensburg, NY. The blockhouse (1838, built during the Rebellions of 1837) has been restored and made part of Fort Wellington National Historic Site. The stone windmill (1822), which served as a makeshift fort for rebels during the bloody Battle of the Windmill, has been preserved nearby.

Prescott prospered as a goods transfer point because of its location where the rapids interrupted transportation traffic. By the 1850s, it was the southern terminus of a railway line to Bytown [Ottawa] and was located on the Grand Trunk Railway. Distilleries and breweries were an important part of Prescott’s economy until the early 1900s. Today the economy is based on light manufacturing and transportation industries. The weekly newspaper is the Prescott Journal.