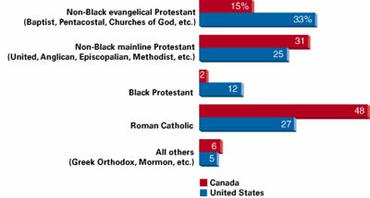 Protestantism is the religious tradition of Western Christianity that rejects the authority of the pope of Rome. Protestantism originated in the Reformation of the 16th century in Christian Europe, and Protestants have been said to share 3 basic convictions: 1) the Bible is the ultimate authority in matters of religious truth; 2) human beings are saved only by God's "grace" (ie, unearned gift); and 3) all Christians are priests; ie, are able to intercede with God on behalf of others and themselves, able to bear witness, able to confess their sins and be forgiven.

When a carefully engineered Catholic majority voted down certain reforms at the Diet of Speyer in Germany in 1529, the defeated minority earned the name "Protestant," derived from the Latin phrase meaning "to testify in favour of something." The rejection of Roman Catholic teaching and practice quickly became focused on rejection of the authority of the pope, often referred to as the "Anti-Christ" by Protestants. Repudiation of the papacy has been the only common characteristic of all Protestants at all times.

The Shaping of Western Civilization

It has been said that Western civilization has been shaped decisively by the other 3 convictions of Protestantism. For example, the veneration of the Bible fostered literacy and popular education. The experience of God's gracious gift paradoxically moved Protestants to insist upon a stern standard of morality, and to work hard (the so-called "Protestant Ethic" described by sociologist Max Weber). The "priesthood of all believers" led to modern democracy, and to worldly activity that ironically favoured the growth of secularism (ie, a standpoint independent of the sacred). While scholars are seriously divided over the validity of these claims, most Protestants have been happy to assert them.

In fact, Protestant practice has often obscured the 3 disputed characteristics. If Protestants unite around the authority of the Bible, they frequently interpret it differently and usually give emphasis to different parts of it. Protestants have been known to speak of God's grace, but to act as if everything depended upon their own human effort. And respect for the ordained ministry of word, sacraments and pastoral care has undermined the priesthood of all believers.

In Contrast to the Catholics

(see Catholicism), Protestants generally celebrate only 2 sacraments (baptism and the Lord's supper) and they emphasize preaching and relative informality in their services of Sunday worship. Protestant congregations often sing in harmony. The high points of their religious calendar are Christmas, Easter and Pentecost (feast of the descent of the Holy Spirit and the founding of the Church). Only in some instances do Protestants (notably Anglicans) include bishops among their clergy, whose ranks usually include women, although not in large numbers. Lay people generally play significant roles in the life of the local congregation, which remains the basic and most characteristic unit of Protestant churches.

The early French explorers brought Protestant chaplains with them to Canada, and their violent disputes with Catholic chaplains established a pattern that recurred in the religious history of Canada. By 1659, however, it was clear that Protestants would not be tolerated in New France. Then the British conquest shifted ascendancy to the Protestants and, until about the time of WWII, Protestants exercised hegemony over the culture and institutions of English-speaking Canada. That Protestant hegemony was finally dissipated by the presence of immigrants from Europe, many of whom were Catholics, Jews and Orthodox Christians, and by the secularizing of Canada. Today Protestants constitute 36% of the Canadian population, and just over half of those Protestants are members of the United Church of Canada and the Anglican Church of Canada (see Anglicanism).

Protestantism took a distinctive form in Canadian history. In continental Europe, Lutherans played a large part, but not in English-speaking Canada. In Britain, the Anglican Church was the established church, but in Canada Anglicans never achieved dominance. In the US, there were many Protestant denominations, but in English-speaking Canada church unions occurred more readily and a few denominations rose to pre-eminence. Until the 20th century with its non-Protestant immigration and secularization, Canadian Protestants had relatively little to protest.

We have seen that historians dispute what the heritage of Protestantism is. Today many wonder what its future will be. Protestants marry non-Protestants with increasing freedom and regularity; Canadian society is increasingly secularized; and religious life itself is more private that it once was. With the new attention that Canadian Catholics are paying to the study of the Bible, to the experience of God's grace in the Charismatic Renewal and to the importance of lay ministry and vocations, the 3 alleged convictions of Protestantism seem less distinctively Protestant. On the Protestant side, the affection and respect which many have shown for some recent popes encourage speculation that the only consistent anchor of Protestantism may be working itself loose.