Fate or just blind luck determined who survived the catastrophe. The timekeeper Huot, who had been just about to whistle the end of the work day, ran in panic as he felt the deck collapsing below him, reaching safety as the last girder snapped behind him. Beauvais went down with the bridge but managed to wriggle free from the debris, escaping with a broken leg. A train engineer plunged with his locomotive into the river but was dragged out alive by a rescue boat. A group of sightseers looked back in horror when they heard the sound, for they had only left the bridge minutes before.

Of the 86 workers on the bridge that August 29, 1907, 75 died, many of them local Caughnawaga, famous for their high steel work. Some of the dead had been crushed by the twisted steel; others by the fall. Still others drowned before the rescue boats could reach them. 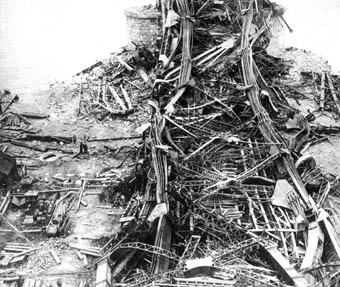 The twisted steel wreckage of the Québec Bridge after its collapse 29 August 1907.

The Quebec Bridge was to be one of the engineering wonders of the world. When completed it would be the largest structure of its kind and the longest bridge in the world, outstripping the famous Firth of Forth Bridge in Scotland. American engineer Theodore Cooper was chosen to design it. He was a proud even arrogant man who had numerous prestigious projects to his name, including the Second Avenue Bridge in New York.

Cooper chose the cantilever structure as the "best and cheapest plan" to span the broad St. Lawrence. That word "cheapest" would come back to haunt him. In order to cut the cost of building the piers farther out in the river, Cooper lengthened the bridge span from 490 metres to 550 metres. When Robert Douglas, a Canadian government engineer, reviewed Cooper's specifications, he criticized the very high stresses the longer span required. Cooper was outraged at the criticism by this nobody. "This puts me in the position of a subordinate," he raged, "which I cannot accept."

Cooper refused to supervise the construction on site, claiming ill health, and trusted Peter Szlapka, who was little more than a desk engineer. By the summer of 1907 the consequences of Cooper's design and of the lack of leadership on the site began to show up on the structure itself, especially in the "compression members" - the lower outside horizontal pieces running the length of the bridge.

A young engineer by the name of Norman McLure was the first to see the problem. On August 6 McLure reported to Cooper that the lower chords on the south arm were bent. Cooper wired back almost plaintively "How did that happen?" McLure reported two more bent chords on August 12 but Chief Engineer John Deans insisted that work continue. On August 27 McLure measured the bend again. The deflection had grown. He informed Cooper who wired the bridge company in Pennsylvania: "Place no more load on Quebec bridge until all facts considered." Cooper assumed that the work had stopped. Deans had read his wire but ignored it.

Remains after the southern span fell in 1907, killing 75.

It took two years to clear the debris from the river. The site became a pilgrimage for engineers come to consider the vast destructive forces of human error. The Canadian government took over the bridge project and rebuilt it with much heavier (and much uglier) cantilever arms. The ill-starred bridge suffered a second disaster on 11 September 1916 when a new centre span being hoisted into position fell into the river, killing 13 men. The bridge was finally completed in 1917 and the Prince of Wales (later Edward VIII) officially opened it 22 August 1919.The Royal Commission of Inquiry investigating the calamity excoriated John Deans for his poor judgment in allowing work to continue when it was obvious that the bridge was in danger. The brunt of the blame, however, was placed on the shoulders of Theodore Cooper, who had committed grave errors in design and his calculation of loads. There was criticism of the bridge company for putting profit above safety and for engineers who neglected their professional and moral duties.