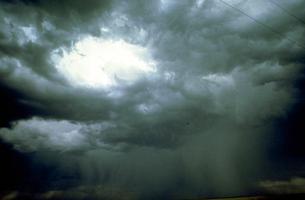 The amount of rain or snow that reaches the ground can vary dramatically on any particular given day, even over short distances. Many people have experienced a near-deluge of rain in their backyard, while at the same time their front yard or their neighbour's home remains quite dry.

Intense rainfalls may occur in Canada under a variety of meteorological situations. Thunderstorms may produce short bursts of rain over small areas (less than about 100 km2) anywhere in southern Canada. Enormous rainfall amounts of 50-80 mm are not uncommon from a single thunderstorm, especially one that remains stationary for one or two hours or moves very slowly. Occasionally, such a storm gives rise to a flash flood - a sudden rush of water channelled into a narrow gully, valley or watercourse, often with devastating results. Storm systems may stall along the Pacific coast and pump moist air up the slopes of the adjacent mountains resulting in prolonged periods of heavy rain. What these storms lack in rainfall intensity, they make up in storm duration. Such a storm can last for several days, and in doing so pour 300 mm or more of rain over several thousand square kilometres. Tropical storms or hurricanes are another major rain producer. Some of Eastern Canada's worst floods have resulted from the prolonged and drenching rains brought by dissipating Atlantic hurricanes.

Occasionally, these intense superstorms position themselves over a region, soaking one unfortunate area while leaving nearby locations dry. One such storm struck the hamlet of Buffalo Gap, Sask, on 30 May 1961. Buffalo Gap is about 150 km south of Regina and near the US border. In less than an hour, the monstrous thunderstorm poured more than 250 mm of rain on the town.

For people living in such northerly places as Eureka on Ellesmere Island, an overabundance of precipitation is not a concern. A year's rain and snow usually amounts to a scant 64 mm - a mere drop in the bucket compared to the annual 6655-mm deluge at Henderson Lake on the west coast of Vancouver Island.

The Pacific coast is the country's wettest region, with rainfalls exceeding 3000 mm annually over large areas. Yet less than 100 km to the east, across the Coast Mountains, lies a sagebrush-dotted semidesert of the Fraser River valley that is one of the driest areas. There the average annual precipitation is 400 mm, with some localities receiving less than 250 mm.

The "rain-shadow" continues across the Prairies, where the annual precipitation ranges from 350-500 mm, increasing at the rate of about 40 mm every 100 km to the east. It rises from 500 mm a year at Winnipeg to 1500 mm at Halifax. Eastern Canada usually has ample and reliable quantities of rain and snow. Ontario and Québec have no special wet or dry season, whereas the end of the year is the wettest time for the Atlantic coast. In the North, the Arctic desert has a meagre 100-200 mm of rainfall and even less snowfall.

Another thunderstorm lingered over the lower Great Lakes for 20 hours in July 1989, soaking the southern half of Essex County in southwestern Ontario with a record rainfall. Triggered by a low-pressure system that remained stalled over northern Ohio, the storm dumped one of the greatest amounts of rain recorded by an Environment Canada gauge in eastern Canada. The 264 mm that fell on the town of Harrow surpassed any official 24-hour rainfall previously recorded east of Vancouver Island, and exceeded even Hurricane Hazel's highest 48-hour total by 40%.

Amounts measured for periods from hours to years have been recorded at Environment Canada weather reporting stations in BC. Measurements are currently taken at nearly 2500 locations across the country. Over the years more than 8000 sites have been sampled for varying periods. The dubious distinction of the wettest day belongs to Ucluelet on the west coast of Vancouver Island. On 6 October 1967, 489 mm of rain fell, a Canadian record, but only one-quarter the amount that fell at the world's wettest place, Cilaos, on La Réunion Island in the Indian Ocean, which recorded 1870 mm on 15-16 March 1952.

Canada's wettest hour, 250 mm between 4:30 and 5:30 pm during that 1961 storm at Buffalo Gap, compares well with the world's wettest hour of 305 mm at the Kilauea Sugar Plantation, Kauai, Hawaii. The accompanying table compares the wettest days on record in Canada.

*Maximum rainfall during a 24-hour period measured by gauges operated at Environment Canada weather stations. Estimates from non-official gauges (as at Buffalo Gap) have not been included in this table.