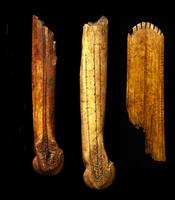 Decorated hide working tools (all broken). Two on the left are beamers, which were used for scraping off hair. The toothed item on the right is a defleshing tool used to remove excess tissue from the inside of the hide (courtesy of Raymond Le Blanc). 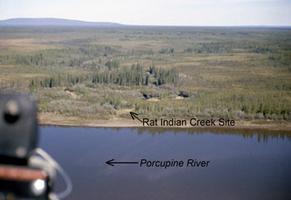 Barbed and unbarbed antler arrowheads from the Rat Indian Creek archaeological site in the Northern Yukon. The site was a major caribou hunting camp for the ancestors of the Vuntut Gwitchin (courtesy of Raymond Le Blanc).
PreviousNext

The Rat Indian Creek site is located above the Arctic Circle, on the Porcupine River, 60 km east of the Vuntut Gwitchin village of Old Crow, Yukon. The site was first visited by archaeologists in the late 1960s after they heard about it from elders in Old Crow. It was briefly tested in the early 1970s, then excavated from 1976 to 1978.

Oral history and archaeological studies indicate that the site area was used as a major caribou hunting camp by the ancestors of the Gwich'in. Families cooperated to harvest animals by intercepting caribou herds as they crossed the river during their annual migrations, to the calving grounds near the Beaufort Sea in spring and on their return in the fall. Evidence of long-term use of the camp appears in the stratigraphy of the site, which consists of a series of layers topped with a grassy clearing used by today's Gwich'in. As archaeologists dug deeper into the riverbank, they found successively older layers that were once the surfaces of ancient campsites. There were seven of these with the deepest and oldest dating to almost 3000 years ago. Changes in some of the artifacts found led archaeologists to divide the site's history into two phases. The first one, the Old Chief Phase, lasted until about 1200 years ago. It was followed by the Klo-kut Phase (now written as Tl'oo K'at), which continued until the Gwich'in began trading with the Hudson's Bay Company in the early- to mid-1800s.

Each layer at Rat Indian Creek had abundant remains left by the inhabitants. There were many ash deposits representing campfires or hearths where people cooked food and warmed themselves. There were also pits that were dug for meat storage or refuse, and thousands of caribou bones attesting to successful hunts. The wide variety of artifacts included tools made of stone or organic materials like caribou bone, antler, and even birch bark. Organic remains were preserved in a natural deep-freeze created by permafrost. This prevented them from decomposing because of attacks by micro-organisms and acids that are commonplace in the soils of the Boreal forest.

Among the organic tools that survived were hide-working implements such as ornamented beamers (ie, a two-handed scraper used to remove hair in the tanning process) and defleshers, as well as awls made from bone splinters and used to punch holes in hides for sewing. There was also hunting gear such as arrowheads and harpoons; food-processing items like gracefully carved antler spoons; and pendants to decorate clothing. Stone tools made from small river pebbles were used to make bone, antler and wooden tools. Besides using local materials, however, the people living along the Porcupine River traded with other aboriginal people who lived hundreds of kilometres away. Evidence of this exchange includes tools made by beating and shaping native copper nuggets that came from southeastern Alaska, and the presence of obsidian, a black volcanic glass that is believed to have come from northwestern Alaska.