The raven is a fierce and crafty bird which widely figures in native mythology as a mischief maker (photo by Brian M. Wolitski). 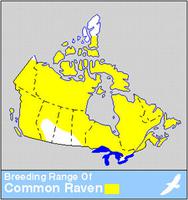 The raven is a large, black bird with a purplish lustre, belonging, like the crow, to the genus Corvus.

Ravens are similar to crows in appearance but larger, with comparatively heavier bills. Throat feathers are pointed and elongated, and the tail is wedge-shaped. Ravens also have low, hoarse voices compared to the higher-pitched caws of its cousin.

Ravens are mainly scavengers and traditionally inhabited mountainous and wild hill country and seacoasts in both forested and unforested regions, although they have expanded into many human-made environments in recent decades. The common raven (C. corax), a fierce and crafty bird, is found in both the Old and New Worlds. It is the only raven native to Canada and is widely distributed, breeding from the high arctic islands (Prince Patrick Island, southern Ellesmere Island) across to Newfoundland. It now occurs in much of central Alberta, southwestern Manitoba, and central and southern Saskatchewan, where it used to be absent.

The only other North American raven, the chihuahuan raven (C. cryptoleucus), is restricted to the southwestern US and Mexico.

Ravens build large nests on cliff ledges, rock quarries, in woodlots, isolated trees, and also occasionally on man-made structures like transmission or cell phone towers, that can be used for several years.

Evidence suggests that pairs mate for life. Ravens are majestic fliers and aerobatic displays seem to be involved in their courtship rituals.

The long life, uncanny intelligence and fearlessness of ravens have given them a unique place in First Nations mythology.