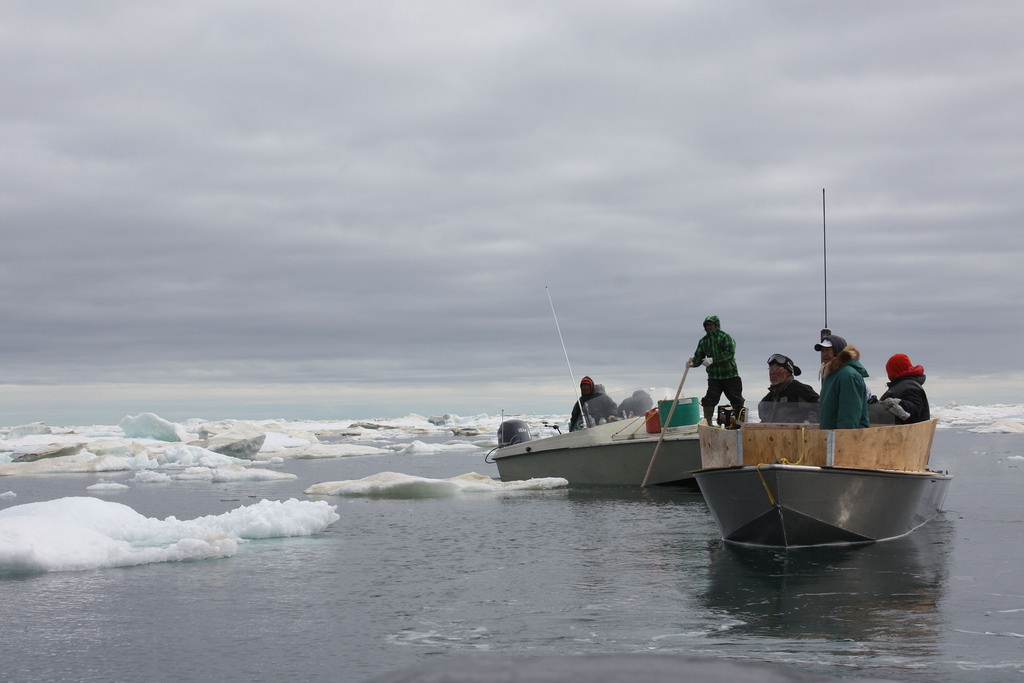 The hunters make the trip to the small island of Qaisuut, about a half-day's boat ride from town. 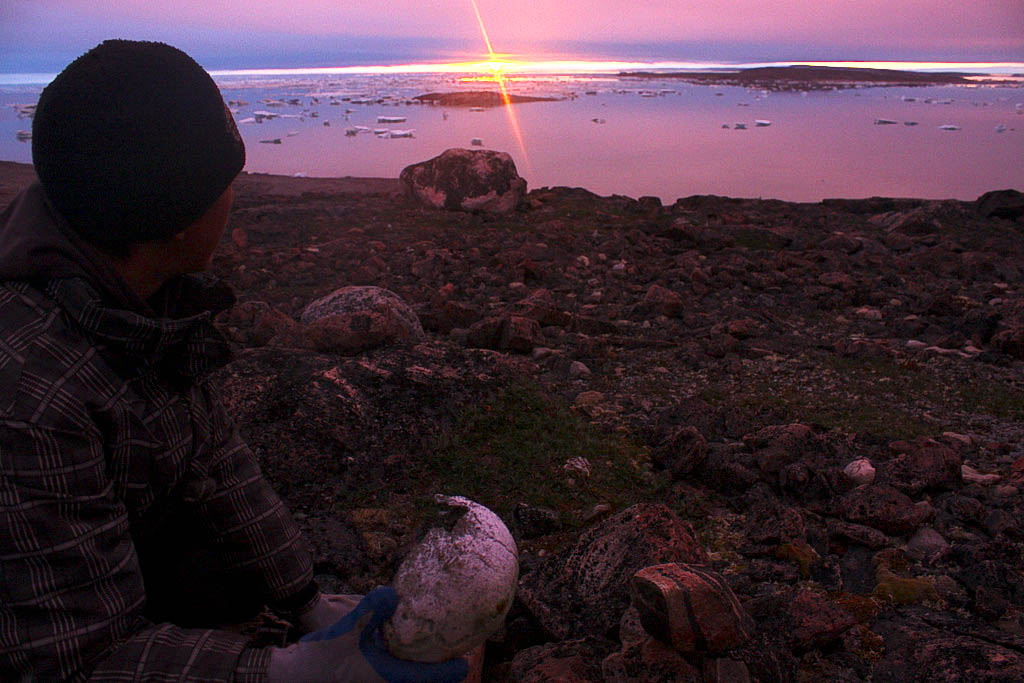 An ancient human skull sits near the beach on the island of Qaisuut, Nunavut, where elders say thousands of walrus once bred. \r\n
PreviousNext

The Aivilingmiut of Nunavut are walrus hunters. Like many regional groups of Inuit, they’re named after the animal that once kept them alive. In all seasons, they follow the aivik (Inuktitut for walrus) north of Hudson Bay, all the way up to Baffin Island. These days, no one survives on walrus anymore; but still, when an Aivilingmiut elder broadcasts over the community radio that she’s craving igunaq —fermented walrus meat — local hunters have a duty to find it.

The boats shove off from a limestone shingle shore. It’s late July, and finally, Igloolik Bay is clear of ice. Each boat carries one family: mom, dad and one or two sons who’ve been chosen to learn the hunt. The loose itinerary says the Airuts, Ammaqs, Irngauts, and Awas will be gone for a week, and they’ve packed enough food and snacks to cover about three days. For the rest of that time, they’ll depend on the land: collecting rainwater from the tops of ice sheets, hunting ducks, and shooting seals when their black heads appear on the flat waves in the distance. They motor for hours, passing a hundred little islands. No one’s worried about running out of land.

Igloolik’s hunters and trappers instituted a moratorium on walrus tourism in 2008, banning sport hunting and photography trips south of Baffin Island. They said the increased traffic from tourists was scaring the animals eastward, toward Cape Dorset. Though the moratorium has since been lifted, some people think increased shipping and development on Baffin Island still stresses the walruses, while others say it’s the loss of sea ice. Whether the Atlantic herd is dying off or moving away is unknown, but locals say there are fewer around today than there were 30 years ago. Regardless, scientists and Inuit agree that changes to the Arctic profoundly affect animal populations, which in turn profoundly affect Northern culture and tradition.

By evening, the hunters make camp at an ancient walrus-hunting outpost, a small island, Qaisuut, just north of the northernmost tip of the Canadian mainland. In the 24-hour sunlight, no one sleeps. Hunter and father Lukie Airut cuts sealskin pelts into thin ropes, shaves the hair off, and dries them against an orange cliff. Elizabeth Awa teaches her granddaughters how to collect heather from the high, green fields and lays it down for a bed. Elder Abraham Uruyaralok sits on his mattress and sings traditional songs. He also monitors the high-frequency radio, chatting with other hunters in the area. The kids walk the thousand-year-old foot trails all night, in the purple light, with rifles. They’re guarding for polar bears. At a flat beach, they repeat the stories their parents told them; this island once teemed with walrus and hunters could pick them off from the land. In a sod house a little ways up from the beach, they find the remnants of ancient tools and kids games, and a human skull. The kids all know about the skull and visit it every time they come to Qaisuut. It’s a witness to what happens when too many hunts go bad and people are forced to change their way of life. All night, Peter Awa plays his fiddle, and boiled seal intestines circulate through the tents. They’re just passing time until morning.

The first herd we see we just watch. They’re like elephants in the water — clumsy. Even in the open ocean, they lumber and gasp, as if it’s difficult for them to keep their noses and mouths out of the water. Their heads bob up and down, tusks stabbing the waves. The six boats gather behind them, but the walruses don’t need to see us to know they’re in danger; they bob their heads a little faster; the herd splits. Awa shoots and hits a bull on the back of the neck. The bull rears back. Two boats rush to his side and pierce him with a homemade harpoon connected to an empty jerry can. He pounds at the jerry can with his tusks. He batters it but cannot puncture it. He rocks the twenty-foot aluminum boat with his thrashing.

Another shot from the boat next door and a cow is hit. Before the hunters can harpoon her, the rest of the herd has banded together around the female, and two others are carrying her away on their backs. An ice floe gets between the boat and the walruses, and Lukie Airut doesn’t think twice — he throws himself on top of the ice. For a moment, he stands with his harpoon poised over his head. When he learned to do this, he learned on a kayak. He throws his spear, but it bounces off her hide. He spears her again, this time through the left flipper. Airut jumps back on his boat and pulls her away from her herd with his sealskin rope. The boat, lopsided with the one-tonne weight, putters toward an ice pan about the size of a high school gym.

Nine walruses are culled from two herds in the morning, and then, all afternoon and into the evening, they’re butchered. It takes nine men and a pulley system to get each walrus out of the water. When fish-splitter knives open the grey, scarred hides, the ice fields turn red with blood. There’s no lunch break — livers and hearts are laid out in front of a lawn chair on the ice, and hunters can snack on them as they work. Each family butchers its own walrus, and each family works in its own way, but everyone’s preparing the same thing: the Aivilingmiut specialty, igunaq. They fold pouches of fat, meat and skin into airtight sacks, and sew the sacks closed with strings of extra skin from around the chest and rib cage. The kids hold their knives and watch how the butchering goes. They will do this hunt after hunt, until they’re ready to try it out themselves. Miss one year and they start to forget.

The boats are full, and the hunt is over; the kids are homesick anyway. The families split off when they get into shore, carrying their igunaq to rock caches just outside of town. The walrus meat, two men to a pouch, is carried to a burrow in the permafrost, where it sits to ferment for up to two years. Some Canada Day or birthday or whenever an elder gets on the radio with a craving for walrus, the hunters will dig it up and the town will remember that taste.