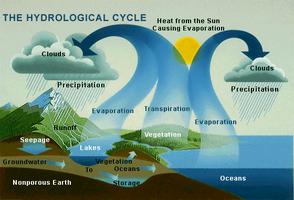 The water cycle is a key element of change in the environment and is essential to all life (artwork by Michael Lee). 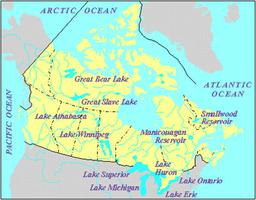 Reservoirs store surface water for use at a later time. Surface water reservoirs are created by building a dam or river at the outlet end of a lake or reservoir to store water. Reservoir water may be used for both off-stream (consumptive) uses such as irrigation, municipal and industrial; and for in-stream (nonconsumptive) uses such as power, recreational developments, flood control and wildlife habitat improvement. Reservoirs may be used to improve the holding capacity of an existing lake or to create new lakes on rivers, creeks or coulees.

Reservoirs, as discussed here, do not include any type of subsurface reservoir structure that stores water, natural gas or oil. Surface water reservoirs are usually classified by 3 basic physical characteristics: maximum depth, flooded area and the volume of water stored at their full supply level (FSL). Large reservoirs may have several target storage levels, each level planned to ensure a usable amount of water at a certain time of year. For instance, in addition to its normal or FS level, a reservoir may have a conservation storage level (ie, the desirable level for a flood-control reservoir at the start of each flooding period), a flood storage level (the maximum desirable level that is permitted for reservoir safety during floods), a dead storage level (the level below which water may not be withdrawn for consumptive uses) and various other target levels established to meet such needs as summer recreational use, irrigation uses and hydropower discharges throughout the year.

Before construction, reservoir sites are subjected to detailed studies to determine their ability to meet the needs of potential users and to assess the overall benefits that can be derived from the project. Studies are usually carried out on a monthly basis, using extensive periods of estimated or recorded monthly historical streamflow to evaluate the project's performance under drought and flood conditions that have occurred historically. The results are used to determine if proposed reservoir would adequately serve its potential users if similar droughts occurred in the future.

A reservoir used for municipal purposes will be designed to have no shortages because the users (people in cities) cannot tolerate periods without water. When uses are such that shortages, although they may be inconvenient, will not cause severe economic hardship, reservoirs are often designed to allow for an acceptable percentage of shortages in critically dry years. This permits more effective use to be made of the available water resources. Two or more reservoirs are often used to maximize the supply potential of a drainage basin. The potential improvement that might be achieved by adding additional potential reservoir storage sites to an existing system may be evaluated by hydrologic studies involving both the existing and the proposed reservoirs. The studies assume that they are being utilized in combination to optimize their overall effectiveness.

When hydrologic studies indicate that the addition of further storage capacity will not significantly increase the yield of a reservoir, either because the additional water stored would evaporate before being used or because all available water has been used, the reservoir has reached its optimum storage capacity and further storage increases would be wasted. It may by feasible to add storage for flood-control purposes. This alternative would require additional studies of potential flooding problems in the downstream river basin to determine if such storage is warranted.

Reservoirs have spillways to divert excess water during above-normal periods. The spillway's capacity is based both on the economic consequences and on the potential danger to human life that might occur if the dam fails. When the potential exists for downstream loss of life, extensive property damage or both, spillways are usually designed to carry the largest flood that may be expected to occur at that site. After construction, reservoirs are operated to co-ordinate consumptive, recreational and power uses with downstream releases to maintain predetermined levels of minimum flow, thus establishing monthly reservoir levels, regulated discharge and diversions.

Several changes occur to the environment adjacent to a reservoir. The lake created by the reservoir provides an additional recreational area, but the pre-existing river is destroyed and the area at the river's edge that used to provide shelter to animals and birds is lost. The river downstream from the reservoir usually has lower peaks and higher low flows because of the moderating effect of the reservoirs during floods and because of additional water released during dry periods.

Colder water is released from the reservoir and fish must either adjust to the new environment or emigrate. However, there is often an increase in volume and diversity of the fish stocked in the reservoir itself, resulting in a net gain to the fishery.

The overall water quality in the reservoir and downstream tends to improve because the reservoir acts as a mixing bowl, averaging out normal seasonal fluctuations. The clarity of downstream water also improves as the river's sediment load is trapped by the reservoir. This process may have an adverse effect on the channel below the reservoir both because the streambed erodes and because the natural environment that contributed to the downstream wildlife and vegetation is disturbed. It no longer derives benefits from the annual flooding cycle of sediment-laden water. Similarly, at the upstream end of the reservoir, the capacity of the inlet channel is decreased by sedimentation.

Lake Diefenbaker is a good example of a multi-use reservoir. After 100 years of proposals and plans the project was approved in 1958. On 25 May 1959 an inaugural ceremony marked the start of construction on the project's main dam, Gardiner Dam on the South Saskatchewan River. This dam, and the Coteau Creek generating station, designed to develop hydroelectric power at the damsite, were completed in 1967. A second dam was built on the Qu'Appelle River to keep water from escaping down that stream. In the spring of 1968 Lake Diefenbaker filled to operating capacity and the first power was generated. In 1970, the reservoir filled to its full capacity for the first time.

At its full supply level the dam controls a reservoir that stores a total of 9.4 billion m3, but only 4 billion m3 of this is live capacity. The remaining 5.4 billion m3 is dead storage, and cannot be used for power or to release water downstream. The maximum depth of water at the dam is 58 m and the reservoir created by Gardiner Dam is 225 km long with a shoreline of 760 km. The spillway is 161 m wide and can pass, at its peak capacity, 7500 m3 of water per second. In an average year 250 000 m3 of water is lost to evaporation from the lake's surface area of 430 km2.

Lake Diefenbaker water is also used for irrigation purposes. In 1986 some 16 000 ha were irrigated, and by 1997 that figure had increased to 43 000 ha. It is estimated that, by the year 2030, 115 000 ha will be irrigated. The Coteau Creek generating station develops an average of 775 million kWh each year, and the downstream hydropower stations in the basin benefit directly from the flow regulation of Lake Diefenbaker. For instance, the Squaw Rapids Plant on the Saskatchewan River near Nipawin, Sask, is now able to generate 40% of its power in the winter (double the previous amount) owing directly to improved outflow from Lake Diefenbaker. Water from the lake is also used to supply 10 potash mines, 11 communities and a series of recreational and wildlife projects using water diverted from the lake.

The lake itself has become a water-based resort area, creating a major recreational lake in a traditionally dry area of Saskatchewan, and waters from this lake are annually diverted into the Qu'Appelle River system to augment the municipal water supplies of Moose Jaw and Regina and to improve the quality and quantity of water in the Qu'Appelle River basin.