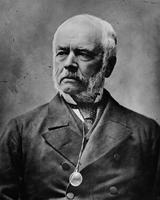 Robert Barry Dickey was born in Amherst, Nova Scotia, to judge and political figure Robert McGowan Dickey and Eleanor Chapman. Educated primarily at Truro Grammar School and at Windsor Academy, Dickey went on to study law at age 15 with Alexander Stewart, representative for Cumberland County in the Nova Scotia House of Assembly (1826–1838). In 1834, he was accepted to the Nova Scotia Bar and set up practice in his hometown of Amherst. In 1835, he was accepted to the New Brunswick Bar. In 1863, he was made a Queen’s Counsel. He was a judge and registrar of probate in Cumberland County for 20 years.

In 1844, Dickey married Mary Blair. In addition to his legal and political work, he held substantial business interests in the lumber sector.

Robert Barry Dickey was appointed to the Legislative Council of Nova Scotia in 1858, where he would serve until 1867. His appointment garnered opposition, with Martin Wilkins, solicitor general in James William Johnston’s government, resigning. Wilkins claimed that Dickey did not have the confidence of the people in his riding and objected to the fact that Dickey had been named to the 1858 Nova Scotia delegation sent to London, England, to discuss the Intercolonial Railway. (Dickey visited London twice, in 1858 and in 1865, as part of a delegation promoting the Intercolonial Railway.) While in provincial government, Dickey acted as the consular agent for the United States, and also as one of the directors of the Nova Scotia Electric Telegraph Company.

He continued to fight for better terms and only converted to support of the union when Canada offered more lucrative subsidies to the province. He remained skeptical of Confederation’s benefits for Nova Scotia, with one biographer speculating that he accepted it only because he felt the second option would be annexation by Canada.

Part of the Québec Resolutions indicated that the first Canadian Senate should be drawn from members of the various provincial legislative councils. Nova Scotia sent 12 men from its council, including Robert Barry Dickey, in 1867. Dickey continued to support the Conservative party from within the Senate, but dedicated more of his time and effort to his business concerns.

Dickey’s political ambitions were passed on to his second son, Arthur, who entered public life in 1888. Arthur Dickey represented Cumberland County in the House of Commons from 1888 to 1896, holding ministerial positions including secretary of state, minister of justice and attorney general, and minister of militia and defence.

Dickey spent 9 years on the Legislative Council of Nova Scotia and 36 years in the Senate. His presence at two of three Confederation conferences, and his eventual backing of Nova Scotia’s entry into Canada, obtained for him the title of Father of Confederation.