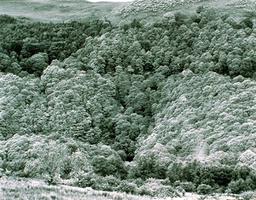 Robert Bourdeau, photographer (b at Kingston, Ont 14 Nov 1931). Self-taught, Bourdeau studied art history at Queen's University, Kingston, for one year, followed by architectural studies at University of Toronto. Employed as an architectural technologist with Central Mortgage and Housing in Ottawa until 1985, he taught photography at University of Ottawa as adjunct professor from 1979 to 1993, and conducted a master class at the Banff Centre for Continuing Education and workshops in other locations in Canada and US.

Bourdeau began to photograph seriously in 1959 after meeting Minor White (American, 1908-1976), the influential teacher, writer and exponent of the photograph as metaphor. Other influences included Paul Strand, the early Modernist photographer, Cézanne and the Italian painter Morandi. Bourdeau's subjects have ranged from the traditional landscape through to architecture and the still life. He has also photographed as far afield as Sri Lanka, Mexico, Costa Rica, England, Ireland, France and the US. His use of large-format cameras (up to 28 x 35.5 cm) and an emphasis upon the contact print links him to a tradition in photography of exacting techniques and thoughtful previsualization before exposing the negative.

Bourdeau's purpose is to produce not simply an appearance of reality, but an experience of that reality in which fact becomes the measure of the spirit of place. He goes beyond the surface to search for the geometry that underlies the apparent chaos of nature, leading him thus to a metaphysical apprehension of the world. His photographs are an initiation into a hushed world of reverie, where nature's forms are the excuse for a mood of subdued contemplation. Light is the key element in achieving these ends. He may take hours or days to study his subject and he exposes only one negative sometimes for an hour or more, literally allowing light to paint its presence on the negative's surface.

Bourdeau is a master technician in transforming the negative image into the positive print. Working only in monochrome, he produces beautiful prints that glow with an inner light.

Bourdeau's works are found in major collections in Canada and the US, including those of the NATIONAL GALLERY OF CANADA, the Canadian Museum of Contemporary Photography, the Canada Council Art Bank, the CANADIAN CENTRE FOR ARCHITECTURE, the NATIONAL ARCHIVES OF CANADA, the Vancouver Art Gallery, the Winnipeg Art Gallery, the Art Institute of Chicago, the Los Angeles County Museum of Art, the Museum of Fine Arts, Boston and George Eastman House, Rochester, NY. In 2006, he was the recipient of the City of Ottawa Karsh Award.