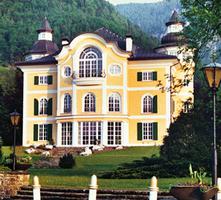 His million chateau signals Campeau's reappearance in the real-estate business, notably with his luxury condo development in a Berlin suburb (courtesy Maclean's).

Robert Campeau, real-estate entrepreneur (born 3 Aug 1923 in Sudbury, ON; died 12 June 2017 in Ottawa, ON). In 1949 Campeau began residential construction in Ottawa; in 1953 he incorporated Campeau Construction Co Ltd and in 1969 amalgamated a number of subsidiaries into Campeau Corp Ltd. One of the largest real-estate companies in Canada, Campeau Corp has been operating in the US since 1978. In 1985 Campeau Corp was involved in development projects in Canada and the US that involved a total expenditure of over $1 billion. The following year his successful $5 billion takeover of Allied Stores Corp was the largest foreign takeover in Canadian history.

In 1988 he continued the storm of takeovers as he bought Federated Department Stores Inc for some $7 billion, the largest takeover in history not involving an oil company. Unfortunately this acquisition strangled Campeau Corp with debt, and in January 1990 the corporation declared bankruptcy, one of the largest in history. A founding member of the board of governors of Laurentian University, Campeau has been chairman of the finance committee for the Children's Hospital of Eastern Ontario and was a member of the advisory board of Guaranty Trust of Canada.