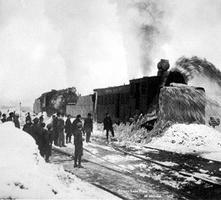 Railways were important to opening the Canadian West to settlement in the 19th century. The biggest challenge to the men who built and maintained the rail lines was the harsh Canadian winter. Thousands of men were hired each winter to clear snow from the tracks with shovels. Many men died before the Elliott-Jull Compound Revolving Snow Shovel was developed in 1869.

The first rail ploughs, in the mid-1800s, were made of steel and fitted to the front of locomotives like cowcatchers. They worked against light snowfalls, but were ineffective in the face of blizzards, drifting snow and avalanches. The railroads tried larger, winged wedge ploughs, but they packed the snow down so hard that shovel crews could not clear the tracks.

In 1869 Dr. J.W. Elliott, a Toronto dentist, designed the first rotary snowplough. A sloped steel casing scooped the snow into a revolving fan inside a wheel driven by a rotary engine on a shaft. Flat plates on the rim of the wheel caught the snow and threw it out of a hole at the top of the wheel. A lack of investors prevented it from being constructed.

Orange Jull, another Canadian, improved Ellliott's design. Jull's rotary plough consisted of a steel wheel approximately 3 m in diameter. It contained several pivoting steel plates, arranged radially, like a propeller. Chambers behind the plates caught the snow and ejected it by centrifugal force through an opening at the top, throwing it clear of the tracks. The assembly was held in a circular housing mounted on a frame. A two-cylinder steam engine and a gear system rotated the wheel in either direction at up to 400 rpm. The plough required one or more locomotives to push it at speeds up to 16 kmh.

The Elliott-Jull snowplough became standard equipment on North American trains. Jull's design was built and tested by the Leslie Brothers, Edward and Sam, during the winter of 1883-84; they bought the manufacturing rights and went into production. Jull produced a second model with a rotating spiral screw between 1890 and 1892, but it was not as successful as the earlier one. The rotary snowplough allowed trains to operate under harsher conditions and the reduced size of snow-shovelling crews put fewer men at risk during winter rail maintenance.