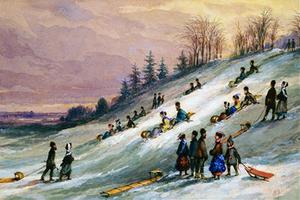 The Royal Canadian Academy of Arts (RCA) is the oldest national organization of professional Canadian artists and was founded in 1880 through collaboration by the Ontario Society of Artists and the Art Association of Montreal under the active patronage of Governor General the marquess of Lorne and his wife HRH the Princess Louise. Among the 26 charter members were the nation's most accomplished painters, sculptors, architects and designers. These included Lucius R. O'BRIEN (1st president), noted for his luminous, majestic landscapes, such as Sunrise on the Saguenay; W.G. Storm, architect of Toronto's Osgoode Hall and St James Cathedral; and Napoléon BOURASSA, acclaimed for his ecclesiastical murals such as those in the Notre-Dame Church, Montréal. The fundamental aim of the RCA was to foster the development of the visual arts, and its initial resolution was the founding of the NATIONAL GALLERY in Ottawa through the creation of a diploma collection, in which each member was required to deposit a work upon election. While the adoption by Parliament in 1913 of the Act to Incorporate the National Gallery formally severed ties between the RCA and the NG, diploma works continued to be deposited until 1976. Another precedent was the establishment of classes in life drawing, not then available through existing courses in art instruction, in Ottawa, Montréal, Toronto, and later in Hamilton, Winnipeg and Halifax.

Until the early 1970s, when a maturing art scene offered many alternate display opportunities, the RCA's greatest contribution to developing Canadian art was through its annual open juried exhibitions.

Considered the senior showcase for artists, they provided a consistent venue which regularly saw the work of gifted newcomers hung beside the best in the country. From the young painter Homer WATSON in 1880, through members of the Group of Seven in the 1920s, to graphic designer Allan Fleming and architect Arthur ERICKSON, painters Harold TOWN of the PAINTERS ELEVEN, as well as Jean Paul RIOPELLE of the Québec AUTOMATISTES in the 1960s, to note the emergence of major talent in these exhibitions is to trace the history of Canadian art.

Since 1970, the RCA has widened its constituency to embrace potentially all visual arts disciplines. With about 700 members distributed across the country, the Academy continues to carry out its mandate of fostering the visual arts through a program of exhibitions and publications.