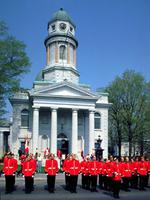 Royal Military College of Canada (RMC), Kingston, Ont, was founded in 1874. RMC stands on the site of significant historic events. Before RMC existed, Point Frederick was established as a naval depot in 1789 when the Lt Gov ordered the Provincial Marine to relocate to Kingston from Carleton Island. Kingston had been established as a refugee settlement for United Empire Loyalists in 1783-84. Though Kingston was not ideal for a naval station, it was Upper Canada's major population centre and therefore was officially a logical choice.

The War of 1812 transformed the little town of Kingston. In 1813 the Royal Navy absorbed the small army naval establishment. Kingston was the key to Upper Canada and the presence of the Royal Navy on Lake Ontario ensured its successful defence. Dockyard facilities were improved and several stone buildings erected, including a stone warehouse known as the Stone Frigate, which still exists.

In 1816 Captain A.G. Douglas of the Nova Scotia Regiment proposed that a military college be established, but it would be 60 years before Canada had a college for training military officers. In 1874, LCol Walker Powell, acting Adjutant-General of Militia, suggested that Canada establish a military school that would provide both a military and scientific education. Until that time, Canadian officer cadets had to study in England.

Prime Minister Alexander Mackenzie supported the idea. In short order, the government passed an Act to establish an institution "for the purpose of imparting a complete education in all branches of military tactics, fortification, engineering and general scientific knowledge in subjects connected with and necessary to a thorough knowledge of the military profession, and for qualifying officers for command and for staff appointments." Kingston, with its military history, was selected as the college site, and some of the buildings of the Naval Dockyard at Point Frederick were used for accommodation.

The school was modelled after the United States Military Academy at West Point. RMC opened 1 June 1876 with 18 cadets, staffed by British military officers and one Canadian civilian. Its early success was apparent in the remarks of Sir Charles Tupper to Sir Adolphe Caron, Minister of Militia, in 1886. "I regard the Canadian Military College as one of the best of its class in the world. The training and results are in every way of a high order, and the Americans themselves, I understand, say better than at West Point."

Queen Victoria conferred the title "Royal" in 1878. The first class graduated on 2 July 1880. Before WWI most ex-cadets took up civilian professions, especially engineering, and 4 graduates received commissions annually in the British army. After 1919 RMC was staffed by Canadians, the first Canadian commandant being Maj-Gen Sir Archibald Macdonnell. Graduates were required to serve in either the active forces of the Crown or the Canadian Militia. The RMC engineering course was recognized as a qualification to practise the profession; certain Canadian universities and provincial law societies accepted RMC graduates to take degrees or diplomas in a final year. Many former cadets held high military rank during WWII. RMC closed in 1942 but was reopened in 1948 as one of the tri-service Canadian Service Colleges (CSC). From 1954 the Regular Officers Training Plan (ROTP) required all CSC graduates to take a regular commission, but a small Reserve Entry was re-established in 1961. From 1959 RMC granted degrees, and graduate courses were added in 1964.

In 1952, Prime Minister Louis St-Laurent's government determined the need for a bilingual military college to provide more equitable representation of French Canadians in the military and founded Le Collège militaire royale St Jean (CMR). The school received its own charter in 1985 and became authorized to grant post-graduate degrees in 1988.

The first graduate to receive his RMC degree was Desmond Morton, one of Canada's most widely read historians and contributor to The Canadian Encyclopedia. Women students were first admitted in 1979. Since 2000 RMC has been administered as part of the Canadian Defence Academy (CDA). With the closure of Royal Roads Military College (RRMC) and Le Collège militaire royale St Jean (CMR) in 1995 as part of the Liberal government's $1.3 billion cut to the defence budget, RMC became Canada's only military college. CMR was reopened in 2007.