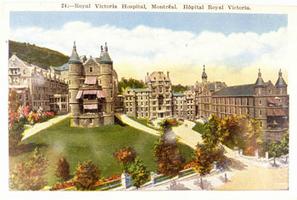 A postcard depicting the Royal Victoria Hospital in the early 1900s.

The original hospital was designed by British architect Henry Saxon Snell. Following the international model of pavilion-plan hospitals, the Royal Victoria, which opened on 2 December 1893, was a U-shaped, south-facing ensemble, whereby 2, multi-storey, open-plan "Nightingale wards" were joined by bridges to a central administration block. The wards were intended to minimize the spread of disease by providing fresh air and light, as were the elegant, wrought-iron sun porches at each ward's end, which offered views over central Montréal, the St. Lawrence River, and as far as Vermont. Because of its picturesque massing, steeply pitched roofs, castle-derived details, and resemblance to the Royal Infirmary in Edinburgh, the original building of the Royal Victoria Hospital is sometimes described as Scottish Baronial architecture. Snell may have adapted the style in order to please the founders and early administrators of Scottish descent, such as John J.C. Abbott and James Ross.

A series of additions to the hospital designed by local and international architects followed the aesthetic model established by Snell, while accommodating the technological requirements of modern medicine. Most notable among these are the Nurses' Home (1906) by Edward and W.S. MAXWELL, the Ross Memorial Pavilion (1916) and the Royal Victoria Montreal Maternity Pavilion (1926) by Stevens and Lee. The associated Montreal Neurological Institute and Hospital, by Ross & Macdonald, was built to the east of the Royal Victoria in 1934, next to Nobbs & Hyde's Pathological Institute of 1924. Due to the steepness of the site, these various additions to the hospital appear freestanding, but are actually connected to the Snell-designed building through sophisticated tunnels and bridges.

After World War II, additions to the Royal Victoria Hospital followed trends in international modernism. The massive medical (1956) and surgical (1959) wings, designed by the Montréal firm Barott Merrett Montgomery Barott, for example, were intended to provide a bold, undecorated backdrop to the Victorian hospital, rather than mimic its original architecture. In 1994 the hospital celebrated its first century by constructing the Centennial Pavilion, designed by Petrucci Larose, including a state-of-the-art emergency department, intensive care unit and birthing centre.

The future of the Royal Victoria Hospital is uncertain. In 1997 it voluntarily merged with the Montreal Neurological Institute, the Montreal Children's Hospital, the Montreal General Hospital and the Montreal Chest Institute to become the McGill University Health Centre (MUHC). Also in 1997, the 1906 Nurse's Home, which had been expanded and named the Hersey Pavilion, was declared a National Historic Site. The MUHC is planning to vacate its historic buildings and move to a new facility built on former railway yards.