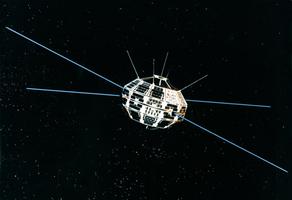 Canada's experience in space began in 1962 with the launching of the Alouette-1 research satellite (courtesy Canadian Space Agency). 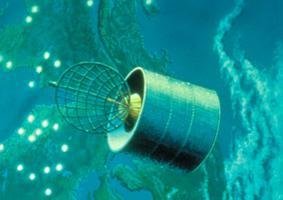 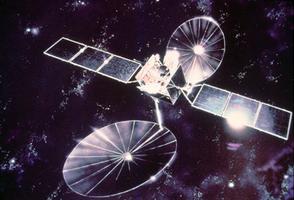 The Space Age was inaugurated in 1957 by the launching of Sputnik 1; in 1962 Alouette 1 signalled Canada's entry into this era. Canada's early interest in the use of space is not accidental. The country's vast area and sparse population prevented the establishment of viable COMMUNICATIONS systems using traditional terrestrial techniques (eg, telephone lines, microwave systems). Communications satellites are not distance sensitive and, from a single location, can provide service over large areas. Recognition of this potential led to the establishment in 1969 of Telesat Canada Corp as a purveyor of SATELLITE COMMUNICATIONS on a viable commercial basis. Since then, 11 Anik-series satellites have been launched.

Canada is endowed with generous natural resources, many of them located in remote areas. Identification, exploitation and management of these resources (eg, mineral deposits, petroleum, forests, agricultural lands) can be greatly assisted by resource satellites, eg, the US Landsat series which Canada has used since 1972 and RADARSAT that the Canadian government approved in June 1987 at a cost of $620 million. RADARSAT is a Canadian-led program to design, construct and operate Canada's first Earth observation satellite. It will supply Canadian and international scientific and operational users, timely synthetic radar (SAR) images for uses such as the monitoring of ice and ocean conditions, land resources and the environment. RADARSAT I was launched on 4 November 1995 and will operate for 5 years. RADARSAT II has been approved to ensure the continuity of SAR data under the RADARSAT program and is scheduled to be launched in 2002.

However, the launch may be threatened by American interests. RADARSAT II is the next generation of remote sensing satellite; it will be a "super-camera" capable of taking photographs of small objects (about 3 m in length, or the size of a car) any place on Earth, from space, through clouds or at night. Like RADARSAT I, it will be used for ecological surveys, mapping remote areas, oil exploration and monitoring ice floes. The capability approaches, or even surpasses, American defence surveillance technology and, according to American defence scientists, poses a threat to American security. The US Congress passed a law redefining satellites as defence products, regardless of their intended purpose, and forbidding the transfer of American defence technology to other nations. Since RADARSAT II incorporates American technology, this law applies to the satellite, and may even be seen as targetting it. If the Americans refuse to launch the satellite, Canada is left with little recourse, as the new law prohibits other nations from doing so. If a foreign contractor agrees to launch the satellite, the company's officials would be liable to prosecution by the US.

Weather satellites also provide increasingly reliable information upon which many activities (including resource exploration) depend. Because of its size and position, Canada is an area where weather systems affecting much of the planet are generated and developed. It is thus important that Canada participate in developing weather-information systems.

Since 1963 Canada has been receiving and analyzing data from American meteorological satellites. Currently the NOAA series of polar orbiting satellites and the GOES series of geostationary satellites provide a detailed picture of the weather over Canada. The eastern GOES is in orbit over the equator, stationary at 75 W longitude, while the western GOES is at 135 W longitude. If necessary, these satellites can provide updated information for selected areas over the continent and surrounding ocean every few minutes. The polar orbiting satellites add information over Canada's more northern regions on a less frequent basis, taking about 100 minutes to complete one orbit.

Since 1987, passive microwave data from US DMSP (Defense Meteorological Satellite Program) satellites have been accessible in near real-time to provide information to Canadian users on sea ice, snow cover and weather conditions over Canadian offshore waters.

Briefly defined, a satellite is a body that revolves about another; thus, the MOON is a satellite of Earth; Earth, a satellite of the SUN. Objects which are lofted into space by humans and which continue to revolve around Earth or another PLANET are referred to as "artificial" or "man-made" satellites. The track repeatedly described by the satellite is called its orbit. Orbits can be relatively low, with an altitude of 200-300 nautical miles and an orbit period of 90-100 minutes for one revolution (eg, those of early US manned flights or the current Shuttle). The forces that keep a satellite aloft can be likened to those affecting an object twirled around at the end of a string: the object's velocity creates a force which tends to propel it away from the source of its initial impulse; the string, like gravity, tends to draw it back towards the source; the 2 forces create a balance which causes the object to remain in a given trajectory (orbit).

The time required for one revolution increases with the height of the orbit. Eventually, an orbital altitude is found at which the satellite takes exactly 24 hours per revolution. Then, if the satellite is moving in the same direction as Earth's rotation and if it remains above the equator (eg, its orbital plane is the same as that of Earth), it will appear to remain immobile above a certain spot on the equator and will be referred to as a geosynchronous or stationary satellite. Most communications satellites are stationary. Such a satellite may be used without requiring constant changes in the pointing of the user's antenna.

One disadvantage, a minor one in many applications, is the lack of coverage over the poles. Polar coverage can be improved by using satellites with orbits inclined relative to the equator; at 90° inclination a polar orbit is described. Such orbits are not only useful in providing polar coverage but, since the satellites are in motion relative to Earth's surface, they will travel, through successive orbits, over Earth's entire surface. These moving satellites are thus useful for REMOTE SENSING, but they require highly sophisticated antenna systems on the ground to locate and follow them.

The useful lifetime of a satellite can range from a few months to 7-8 years or more. This rarely depends on the quality of the mission-related equipment; usually, it is limited by the amount of fuel on board or, in some cases, by degradation of solar cells or loss in battery capacity. Fuel is expended to change or correct orbit or to change the attitude (eg, direction) of the satellite relative to the Earth or the sun, etc. Even nominally "stationary" satellites can move from their initial positions under the influence of the sun, moon, planets, particle bombardment, etc. Corrections are made by activating small jets or nozzles.

The most advanced technologies contribute to the success of today's relatively sophisticated space systems, and yet the Space Age is in its infancy. Many novel and ambitious concepts, some still found only in the pages of science fiction, are attracting the attention of the scientific community and of industry and social scientists.
×