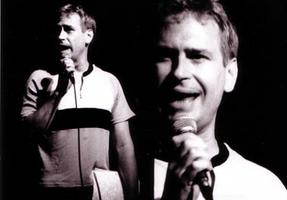 Scott Thompson, actor, writer (b at North Bay 12 June 1959). Scott Thompson grew up in Brampton, Ont, and attended Brampton Centennial Secondary School. At 19 he became involved with Canada World Youth and spent some time in the Philippines. In 1983 he received an honours Bachelor of Fine Arts degree in English and theatre from York University.

Thompson met Mark MCKINNEY while performing with a sketch comedy troupe called The Love Cats. McKinney was already working with Bruce MCCULLOCH in the comedy duo The Audience. They later teamed up with Dave FOLEY and Kevin McDonald, who were working under the name THE KIDS IN THE HALL. Thompson was an occasional guest performer when the group first formed in 1984, though he became a regular member soon after.

The Kids in the Hall quickly gained a following performing in downtown Toronto nightspots, where they were scouted by the producers of Saturday Night Live (SNL). The group broke up for a short time when McKinney and McCulloch were invited to New York to work as writers on SNL. They were reunited in 1986 and SNL executive-producer Lorne MICHAELS soon began making plans for the TV show. In 1987, he sent them all to New York for what was essentially a comedy boot camp, and in 1989 their HBO/CBC pilot was aired.

It was during a 1990 sketch on the Kids in the Hall's first self-titled television series that Scott Thompson literally "came out of the closet." He is perhaps best known for his comedic monologues as Buddy Cole, a witty gay socialite. Buddy's monologues, delivered from a stool in his own gay bar, were scathingly funny but drew criticism from the gay community because it was felt that Cole perpetuated gay stereotypes. He appeared as Buddy Cole in Bruce LaBruce's controversial film Super 8½ (1993). He was equally famous for his wicked impression of Queen Elizabeth II, his Brazilian movie star Francesca Fiori, the straightlaced businessman Danny Husk and everyone's favourite housewife Fran Wilson.

When The Kids in the Hall completed its run in 1995, Thompson joined the cast of The Larry Sanders Show for 35 episodes as its first openly gay character. He appeared in the miniseries Armistead Maupin's More Tales of the City (1998) and its sequel Armistead Maupin's Further Tales of the City (2001), and in 2004 he starred in a Canadian movie of the week, Prom Queen: The Marc Hall Story, which focused on the legal fight by a gay teenager to bring a same-sex date to his Catholic high school prom. Thompson has made guest appearances on many continuing dramas and sitcoms, including Street Legal, Star Trek: Voyager, Providence, Touched by an Angel, The Simpsons and Puppets Who Kill.

During its time on the air, The Kids in the Hall received 3 Emmy Award nominations for its writing and 9 GEMINI Award nominations, winning in 1989 and 1993 for best writing in a comedy or variety program. In 1996 Thompson co-wrote and appeared in the film Kids in the Hall: Brain Candy, in which the five-man comedy team plays more than 40 different characters.

In addition to his film and TV work, Scott Thompson performs as a standup comedian and in self-penned one-man shows such as Champagne Soul, Around the House and The Lowest Show on Earth. In 2000, 2002 and 2008 The Kids in the Hall embarked upon successful North American tours, reprising many sketches from the show. In 2004 Thompson brought Buddy Cole back to life on the Comedy Central cable special Out on the Edge, and in 2006 he hosted the first season of the Canadian reality show My Fabulous Gay Wedding. The Kids in the Hall continue to write and perform together and made several appearances with a brand-new stage show at the Just for Laughs Festival in Montréal in 2007. Their eight-part CBC-TV miniseries, Death Comes to Town, was filmed in 2009 and began airing in January 2010.

A fictional autobiography of Buddy Cole, Buddy Babylon, written by Thompson and Paul Bellini, was published in 1996. Thompson also wrote the satirical documentary Uncle Saddam (2000), which was directed by Joel Soler. The explosive fallout from the film inspired Thompson's one-man show, Scottastrophe.