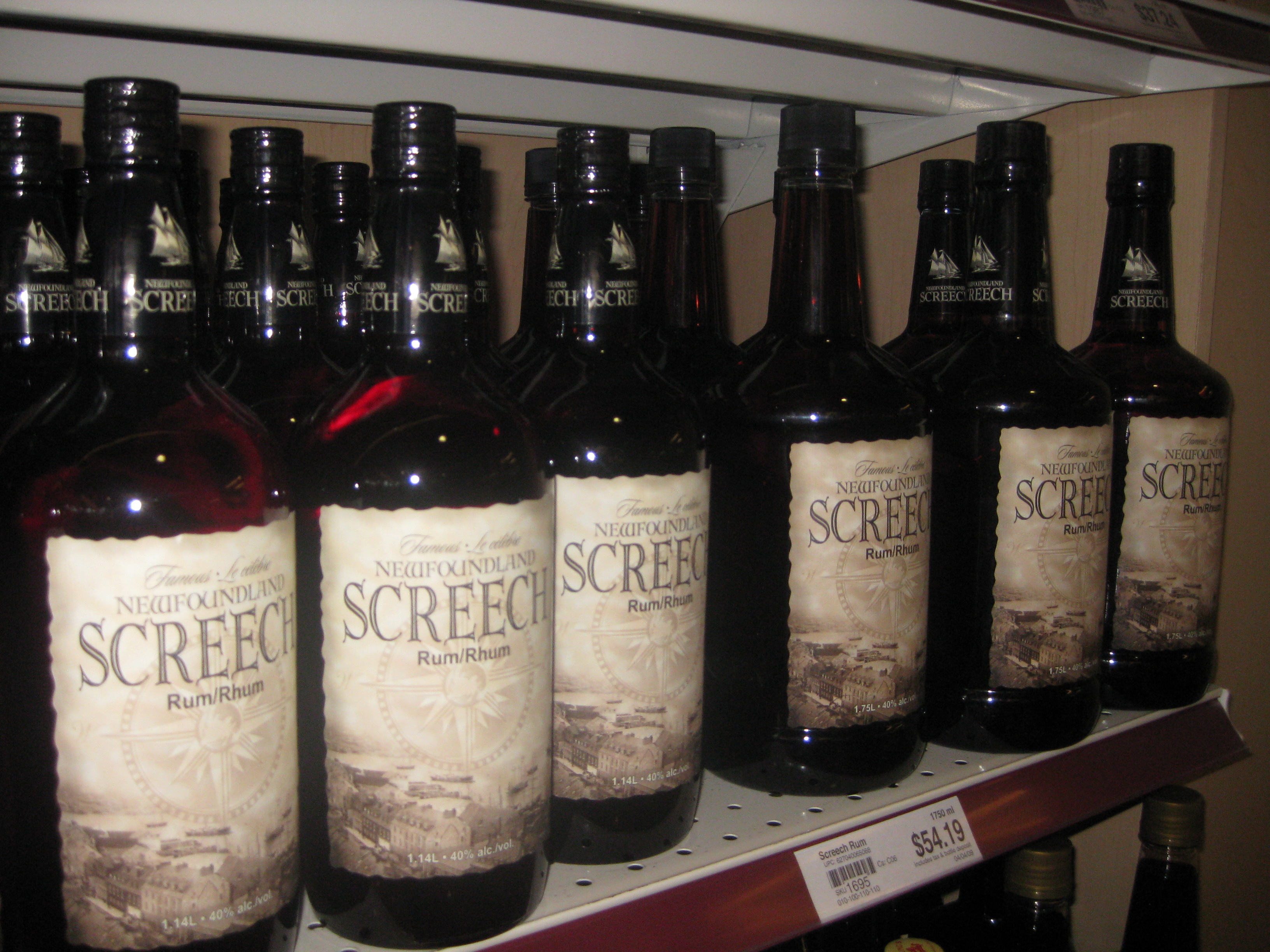 Screech is a type of rum popular in Newfoundland and Labrador. It was originally a Demerara rum (a type of rum made in Guyana in South America) that was imported to Newfoundland as part of the triangular trade that sent salted codfish down to the British West Indies to help feed the slaves in the Caribbean and Americas.

Rum has always been popular in Newfoundland. In the early 19th century, when the small British Dominion had approximately 20,000 inhabitants, import statistics estimated that 371,000 gallons of rum and spirits were imported from the British West Indies, and an additional 443,000 gallons from other sources. Indeed, the history of Newfoundland has been described as "a long battle between rum and religion." Now, screech is Jamaican rum, bottled in Newfoundland and Labrador. It is amber brown in colour, 40 per cent alcohol by volume, with a spicy nose of brown sugar and vanilla.

The name screech is a bit of a mystery, though the term itself comes from “screigh” in Scottish dialect. According to local legend, the name came from an American serviceman. The story goes that the soldier was at a bar and asked for a shot of rum. Upon consumption, he howled at the flavour's strong bite. A superior officer asked what the noise was, to which a local Newfoundlander responded, "The screech? T'is the rum me son." However, this is almost certainly mere fabrication. Some assert that screech was a general term for rum used around Newfoundland. Someone might enter a bar and ask, "What's the screech?" In either case, the actual etymology of screech is still unconfirmed. The Dictionary of Newfoundland English is only willing to go back as far as 1957 for its usage in reference to rum, which was when the Newfoundland and Labrador Liquor Corporation (NLC) started bottling it with the name. Nevertheless, it is well-established that the name goes back to at least the 1940s, which was where the NLC got the idea.

The 1940s was a time of great upheaval for Newfoundland. During the Second World War, Britain gave the American and the Canadian military the authority to set up army bases. The island was flooded with American and Canadian service personnel. Newfoundland's population was increased by 10 per cent. The economic windfall was significant, along with the influx of 20th-century technology, such as cinemas and modern vehicles; up until this time, Newfoundland was still very much isolated from the rest of North America. However, many Newfoundlanders felt these new come from aways or "CFAs" looked down upon their old traditions and way of life. Likewise, it was at this time that the term Newfie came into usage. This collision with the outside, modern world was a fertile ground for a new initiation ritual to germinate.

Though around this time rum was losing its appeal, being replaced by beer and wine, cheap Demerara rum became a crucial element in showing come from aways a Newfoundland "experience." However it happened, the NLC weren't long capitalizing on its branding potential. Shortly thereafter the NLC started selling rum under the name Screech and began issuing certificates to tourists as keepsakes, signifying that they'd had a shot of screech and were now officially members of the "Royal Order of Screechers."

The term screech-in could only have arisen during the counterculture years of the 1960s, taking its name from protest movements such as sit-ins and bed-ins. At around this time, Merle Vokey, a teacher, was putting on performances at Atlantic teachers' conferences. Looking for inspiration, he spoke to his father about rituals local fishermen would perform to bestow "honorary Newfoundlander" status on outsiders. These generally involved singing types of songs or shanties and various other kinds of audience participation. Vokey adapted these rituals for the teachers. The NLC approached Vokey about marrying his performance with their screech certificates. As a result, there was a ritual crowned by a shot of screech, bestowing honorary Newfoundlander status.

Merle's son Keith has now become St. John's de jure master screecher. Keith performs regularly at Christian's Pub, a bar on George Street, as well as at conferences and private functions. George Street, a two-block stretch of bars, is the heart of St. John's downtown scene. While performing, Keith wears green oilskins and a sou'wester atop his head, which is meant to represent a "traditional" Newfoundland fisherman. He begins the ritual by singing a song and clapping his hand against a wooden oar. He then introduces himself to the participants, and encourages them to participate with a song, a dance, or a joke. The goal here, he says, is to create the atmosphere of a Newfoundland kitchen party. He speaks in a thick, exaggerated Newfoundland accent, using colloquialisms and malapropisms, often referred to as Newfinese.

After the screechers have successfully recited the creed, a plate of bologna is passed around. For reasons that are difficult to trace, bologna has always been a wildly popular meat in Newfoundland, often referred to as Newfie steaks. The average Newfoundlander consumes 4 kg of bologna a year. The easiest explanation is that it's cheap. The province has always struggled with the economy, with boom and bust years in the fishery, and long stretches of unemployment in the off-season. Therefore, it stands to reason that bologna would become a staple for many families. In addition, bologna is high in sodium, with 740 mg per 100 g serving, and salt has always played a large role in Newfoundland cuisine. 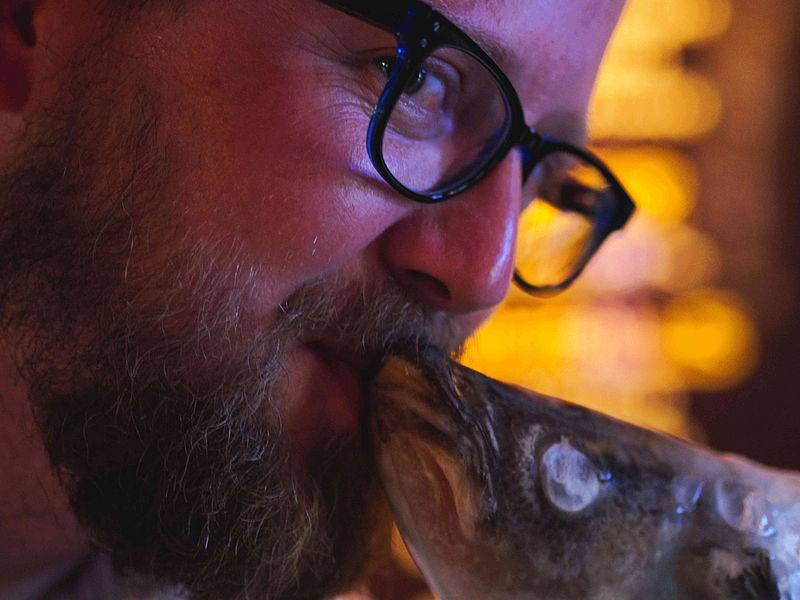 The next stop following the bologna is kissing the cod. The screechers kneel as Keith takes out a frozen cod from behind the bar. The participants must each give the cod a kiss. The role of cod in Newfoundland cannot be overstated. When John Cabot "discovered" the island for the British in 1497, he claimed that the sea was so plentiful with cod that a person "could walk across their backs." However, Basque and Portuguese fishermen already knew this to be true and were fishing the Grand Banks before Cabot set sail. It was one of the biggest fisheries in the world until its collapse and subsequent moratorium in 1992.

Finally, to cap it all off, comes the shot of screech. The screechers are now all "honorary" Newfoundlanders.

There are many variations of the screech-in, and Keith is hardly the only master screecher in Newfoundland. Nevertheless, the four main ingredients are the following:

1. Say something Newfoundland — the creed is nearly always the same.

2. Eat something Newfoundland — bologna is the most common, but capelin, a tiny fish, is sometimes used, as well as Peppermint Knobs, which are locally made candies.

3. Kiss something Newfoundland — usually a cod, but the squeamish can also kiss a toy puffin.

4. Drink something Newfoundland — obviously, screech is most often used, but Purity syrup, a locally made concentrated fruit-flavoured drink, is a non-alcoholic option.

The screech-in is certainly not without its critics. Many detractors claim that it reinforces negative stereotypes about Newfoundlanders. Indeed, as in the case with Keith Vokey, the master screecher is adorned in stereotypes. Moreover, not only are these depictions deliberate caricatures, they are no longer relevant to modern Newfoundland. The cod fishery is no longer the main economic force on the island, and most of the people who work in the fishing industry are in processing plants, never having to go out to sea unless for recreation.

The concern over stereotypes goes back to the 1940s and the emergence of the "Newfie," the idea that Newfoundlanders are quaint fisher folk with silly traditions and funny accents. Over the decades, many have tried to dispel the Newfie stereotype. In the 1990s, Premier Clyde Wells tried to stop the NLC from issuing its "Royal Order of Screechers" certificates.

However, part of the fun of a screech-in is lampooning these stereotypes. When Keith performs his screech-in, it is clear to everyone watching that it's a fabrication. The goal is to let the outsiders in on the joke. People may come to Newfoundland with preconceived notions of what life is like there, but the screech-in is a way for locals to demonstrate a tongue-in-cheek self-consciousness.

Furthermore, given its popularity, screech isn't going away anytime soon. The screech-in has been a real boon for bars in Newfoundland. Along with Keith Vokey at Christian's, a number of other bars on George Street offer screech-ins as well, each distributing their own certificates and keepsakes, such as custom shot glasses. The NLC continues to capitalize on screech's branding success, selling T-shirts and other various paraphernalia. Even local coffee brewers Jumping Bean sell screech-flavoured beans.

Screech has become a real cultural totem for Newfoundlanders. It is a metaphor for many of the qualities that Newfoundlanders like to think about themselves and their home: strong, unique, and with a bit of self-deprecating, back slapping humour.