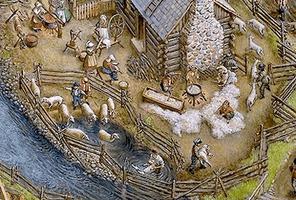 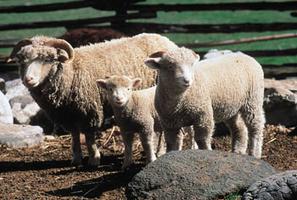 Sheep farming (family bovidae; species ovis aries) in Canada goes back as far as the beginning of agriculture. The first sheep were introduced to the country in 1664. In 1667 in New France (now Québec), there were 45 sheep that had been brought from France, while in 1671 Acadia (now Nova Scotia) counted 407 sheep. In the West, ovines were introduced later, around the mid-19th century. At that time, sheep were needed for manufacturing clothing and to feed the first settlers. At the beginning of the 20th century, the Canadian ovine population was around 2.5 million head; it reached a peak in 1931 with 3.6 million ovines. Following the two World Wars, with the arrival of manufactured fabrics and synthetic fibres along with the internationalization of the wool market, the demand for wool decreased considerably. As a result, Canadian ovine breeders had no choice but to give up wool marketing and to turn to lamb meat production. After 1931 the Canadian ovine population continued to decrease; it reached its lowest level in 1977 with 560 000 sheep. Canada now counts around one million ovines. Ontario and Québec are the two most important producing provinces, followed by Alberta.

Wool continues to have very little commercial value for Canadian breeders, for whom lamb meat has become the main product. Lamb is a very tender red meat with a more distinct flavour than beef or pork. This particular and unique flavour is the result of its specific content of fatty acids. Although it has been increasing in the last 10 years, ovine meat consumption is relatively low compared to other meats. It amounts to just over one kilogram per person annually, while the consumption of beef, for example, is about 20 kilograms per person per year. Despite this, Canada produces less than half of the ovine meat it consumes; the remainder is supplied by importing, mostly from New Zealand, Australia and the United States. It is anticipated that lamb meat consumption in Canada will increase significantly through to 2020, as a result of the increase in immigration and also because consumers seek more and more to diversify their diet.

The production of ewe milk for cheese manufacturing is blooming, particularly in Québec and Ontario. Ewe milk is about twice as fatty and has 40% more proteins than cow or goat milk, which makes it particularly suitable for cheese production.

There are about 860 pure breeds of sheep in the world. In Canada, 52 breeds are present and the large majority is selected and bred for meat production. Breeds that produce quality wool are almost absent. Around 1830 British immigrants brought the first pure breeds to the country. British breeds continue to comprise the basis of Canadian ovine livestock.

Breeds are divided into four main categories: maternal, paternal, prolific and milk sheep. The "maternal" breeds are recognized for their aptitudes to raise lambs: well-developed maternal instinct, good milk production and low lamb mortality. The Dorset and Polypay are the most popular breeds of this kind. The "paternal" breeds are bred and selected for their meat-producing qualities: rapid growth, good muscular development and low fat deposition. The Suffolk, Hampshire and Texel are good examples. There are also some breeds that are said to be "prolific"; their main characteristic is that they give birth to several lambs (an average near three lambs/lambing). Of this kind are the Rideau Arcott, a Canadian breed developed by researchers from Agriculture and Agri-Food Canada in Ottawa, and the Romanov. The "commercial" ewes are usually a mix of different breeds in order to gather, in a single female, several desirable qualities (number of lambs born and raised, good milk production, etc.).

Although the dairy sector is still not well developed in Canada, compared to other countries, three milk sheep breeds are available for breeders: the East Friesian, British Milksheep and Lacaune.

Sheep have a special reproduction in that it is seasonal. Naturally, a ewe can only be mated during a short time of the year, the "breeding season", which is in the fall and winter. During the spring and summer, it is very difficult to achieve fertile matings; it is the "non-breeding season." This variation in natural fertility is controlled by the length of day; during the short-day period (fall and winter), the ewe's reproductive system is fully functional, whereas it becomes dysfunctional in the long-day period.

In Canada, the ewes' period of sexual activity is well defined and extends generally from August to February. Nevertheless, it can vary based on different factors, including breed, age and feeding level. In traditional breeding, ewes are mated in the fall; therefore the number of lambs available on the market in the spring is high (the gestation period is, on average , 145 days). On the other hand, the availability of lamb meat decreases during other times of the year. In order to respond to consumer demands, sheep breeders structure their production to ensure consistent year-round supply. This implies a distribution of lambings throughout the year and, consequently, matings. Several mating techniques for the non-breeding season have been developed to ensure a regular supply in ovine meat. One of the most popular in eastern Canada (Québec and Ontario) is certainly the control of reproduction using artificial programs of photoperiod (length of lighting or day length) inside sheep barns. Several Canadian sheep researchers have contributed to develop this technique.

Production systems in Canada vary in each region. In order to increase the productivity and profitability of their business, the majority of producers in Québec and Ontario use a mating system that aims to achieve one lambing every 8 months for each ewe of the flock (a system named "intensive"). In addition to increasing productivity, this system also allows the distribution of lamb marketing over different periods of the year. In the other provinces, most of the producers breed ewes once every 12 months, usually in the fall, in order to get only one birth per ewe each year (this system is called "extensive").

The extensive system favours the use of pasture and reduces production costs and work hours of producers, but it often causes problems with predators (coyotes, wolves). In some provinces farther east, the often-difficult environmental conditions related to severe temperatures make it necessary to use buildings. In intensive production regions, producers tend to keep their sheep inside barns during the entire year in a controlled environment where the handling of animals is easier. Keeping the sheep inside limits losses to predators, allows better control of diet than in the free pasture system and limits the risk of diseases such as foot rot. Nevertheless, these systems involve higher production costs than extensive systems.

The adult sheep is a ruminant, like the cow. It must therefore be fed mainly with forage. At some stages of production, when the animal's nutritional needs are higher (mating, gestation, lactation), grain (corn, barley, oats) is added to the daily ration. A vitamin and mineral supplement is given as well to make up for mineral and vitamin deficiencies in forage, which are often a consequence of the type of soil where it is grown.

A lamb is generally left with its mother up to 60 days. It can be slaughtered when it is about 23 kilograms to produce a "suckling lamb," a meat that is very appreciated by ethnic communities. It can also be fattened up to about 45 kilograms to give a "heavy lamb" with a bigger carcass that will be transformed into the different cuts that are found in grocery stores. During its growth, the lamb is mainly fed a grain mix.