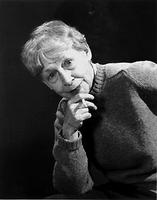 Sheila Watson, née Doherty, novelist, critic, teacher (b at New Westminster, BC 24 Oct 1909; d at Nanaimo 1 Feb 1998). Publication of Watson's novel The Double Hoook (1959) marks the start of contemporary writing in Canada. She attended UBC and later completed a PhD at U of Toronto under Marshall McLuhan. A distinguished scholar of the early modernist period in Britain, specializing in the works of Wyndham Lewis, Watson taught school in the BC interior and later taught at U of Alberta. She was awarded the Lorne Pierce medal by the Royal Society of Canada in 1984.

Her Four Stories appeared in 1979, and one other story, And the Four Animals, in 1980; these two works were later amalgamated as Five Stories (1984). Her critical articles were collected in a special issue of Open Letter (1974). She was the founding editor of the periodical White Pelican (1971-75), and a volume of essays in her honour, Figures in a Ground, appeared in 1978. The Collected Works of Miriam Mandel (ed by Watson) was published in 1984. In 1992, a much earlier novel, Deep Hollow Creek, written in the early 1930s, was finally published.

Watson made possible-through her intellectual daring, the sophistication she assumed in her readers and her sceptical care for the nature of language itself-the development of contemporary writing in Canada. The Double Hook presents in concise, symbolic terms a drama of social disintegration and redemption, set in an isolated BC community. Watson has said of the novel that it is "about how people are driven, how if they have no art, how if they have no tradition, how if they have no ritual, they are driven in one of 2 ways, either towards violence or towards insensibility - if they have no mediating rituals which manifest themselves in what I suppose we call art forms." These themes are presented in a style which itself balances on a "double hook": it is simultaneously local and universal, realistic and symbolic.

Writers such as Robert Kroetsch have seen in the image of the double hook a balancing of opposites that is a fundamental characteristic of Canadian culture. Deep Hollow Creek treats many of the same themes in a manner which is more direct and conventional, but no less elliptical and challenging. It is fascinating to imagine the ways in which Canadian fiction might have been transformed if this startling and brilliant novel had been published at the time of its first composition. She was married to Wilfred Watson, with whom she retired to Vancouver in 1980.