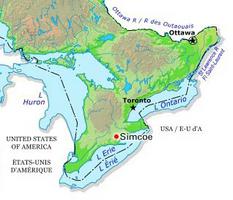 Simcoe, Ont, urban area, population 14 777 (2011c), 14 522 (2006c). Simcoe was named after John Graves Simcoe, first lieutenant-governor of Upper Canada (1791-96), who visited here in 1795 and granted milling privileges to Aaron Culver, a Loyalist settler. A small hamlet developed around the mill. Plundered and partly burned by American soldiers during the War of 1812, the hamlet survived and expanded. Simcoe was incorporated as a village in 1851 and as a town in 1878. Its position as the county seat of Norfolk accelerated the community's growth.

The town of Simcoe, including the nearby hamlet of Hillcrest, was one of 6 area municipalities formed as part of the Regional Municipality of Haldimand-Norfolk in 1974. The establishment of regional government offices at Townsend in the former city of Nanticoke did little to diminish Simcoe's importance as the area's judicial and business centre. When Haldimand-Norfolk split into the new Norfolk County and Haldimand County in 2001, Simcoe resumed its position as administrative centre of Norfolk County.

Simcoe serves the surrounding area as a retail and service centre. Agriculture, including flue-cured tobacco, fruits and vegetables, is a major part of the local economy, but manufacturing and service businesses are increasingly important.