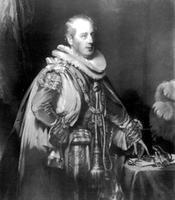 Governor general of Canada 1841-43, and negotiator of the treaty that eliminated armaments on the Great Lakes (courtesy Metropolitan Toronto Reference Library/T14996).

Sir Charles Bagot, governor general of British North America 1841-43 (b at Rugeley, Eng 23 Sept 1781; d at Kingston, Canada W [Ont] 19 May 1843). Educated at Rugby and Oxford, he was elected to the British Parliament in 1807. He served as undersecretary of state for foreign affairs and successively as minister to France and to the US, as well as ambassador to Russia and to The Netherlands. In 1817 he negotiated with the American secretary of state, Richard Rush, an agreement providing for disarmament on the Great Lakes and Lake Champlain (RUSH-BAGOT AGREEMENT).

In January 1842 Sir Charles arrived in Kingston as GOVERNOR GENERAL of Canada. By September, it was apparent that the administration of his predecessor, Lord SYDENHAM, was about to lose the confidence of the majority in the assembly. Bagot invited the French Canadian leader, Louis-Hippolyte LAFONTAINE, to join the Executive Council, which he did along with Robert BALDWIN. Although Bagot had not fully conceded the principle of RESPONSIBLE GOVERNMENT, his invitation to LaFontaine was not fully approved in London, and his policy was repudiated by his successor, Sir Charles METCALFE.

Although for many months before his death Bagot was bedridden and unable to play an active part in government, he was severely criticized by Tory leaders. However, his popularity among Reformers, especially French Canadians, remained strong. It was aided by his fluency in French, his charm as a speaker and his great gift for diplomacy in politics. His wife, Lady Mary Wellesley-Pole, a niece of the Duke of Wellington, was very popular in the social circles of Kingston and Québec.