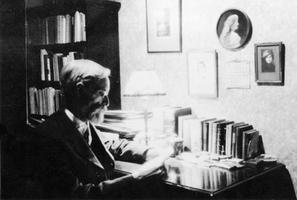 Because of its early maturing quality, Saunders's Marquis Wheat greatly extended the area where wheat may be safely grown (photo courtesy Grace Taylor).

Sir Charles Edward Saunders, public servant, plant breeder (b at London, Ont 2 Feb 1867; d at Toronto 25 July 1937), third son of William SAUNDERS. He selected, tested and introduced MARQUIS WHEAT to the Canadian West, the foundation for the large commercial production of high-quality bread wheat in Canada. Like his 4 brothers, Charles assisted his father in his many varied interests of plant hybridization, entomology and music.

Charles was the least robust of them all but perhaps had the highest standards. Educated at U of T and Johns Hopkins U, he was a professor of chemistry at Central U, Ky, in 1892-93 and then devoted 1894-1903 to the study of music and teaching of voice. In 1903 his father, recognizing his meticulous standards and perseverence, appointed him to the Experimental Farms Service as experimentalist. (The title became cerealist in 1905 and Dominion cerealist in 1910.)

Saunders immediately applied scientific methods to his new task and spent summers selecting individual heads of wheat from breeding material that previously had been selected in mass. From a cross of Hard Red Calcutta by Red Fife, made in 1892 by his brother A.P. Saunders, a new variety, Markham, resulted.

Markham did not produce uniform offspring, however, even though many plants had desirable characteristics. Saunders carefully selected individual heads from early plants that had stiff straw. He emphasized that seed from each plant was grown separately with no mixing of strains. Selection was rigorous, only the top lines being kept. He determined which lines had strong gluten by chewing a sample of kernels, and he introduced the baking of small loaves to measure volume. The best strain was named Marquis. In 1907 all surplus seed was sent to Indian Head, Sask, for further testing.

According to Saunders's annual reports, the response of Marquis to Saskatchewan conditions was phenomenal. It was a week earlier than Red Fife, produced high yields and made excellent bread. Marquis remains the standard for bread making. By 1909 sufficient seed had been produced to permit its distribution to 407 farmers. The following year 2112 farmers received samples. Wheat could now be grown confidently in Saskatchewan and Alberta, where Red Fife frequently matured too late and was damaged by frost.

By 1920, 90% of the wheat grown in western Canada was Marquis and a large acreage was grown in the US. Marquis was the variety that matured early, thus avoiding damage from frost. It yielded as well as, or better than, any other early variety. It produced a "strong" flour and therefore was in demand by the millers and bakers of the world. Marquis was the variety that made Canada famous for its hard red spring wheat and annually produced millions of dollars in export revenue for Canadian farmers and Canada. Saunders also applied his single-line selection methods to barley, oats, peas, beans and flax and introduced several new excellent varieties of each kind of crop.

In 1922, after 19 years as a plant breeder, Saunders suffered a physical breakdown and resigned his position. He went to Paris where he studied French literature at the Sorbonne for 3 years. He returned to Ottawa but moved to Toronto in 1928. He was knighted in 1934. He continued to lecture on both Marquis wheat and the French language. Music was his major consolation until his death.