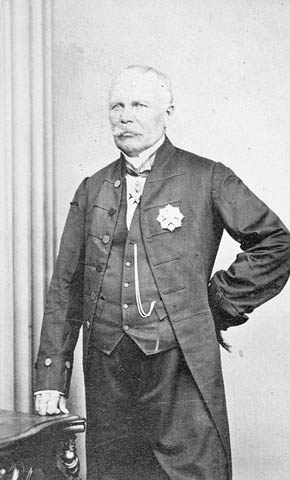 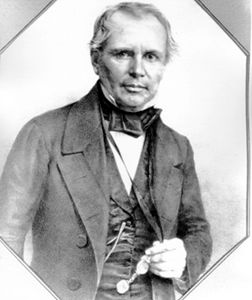 In May 1856, Taché joined John A. Macdonald in a ministry that sealed the alliance of Upper Canadian Conservatives and Canadien Liberals in a unified party. Lithograph 185? (courtesy Metropolitan Toronto Reference Library/T14888).
PreviousNext
Sir Étienne-Paschal Taché, politician, doctor (born 5 September 1795 in Saint-Thomas [Montmagny], Lower Canada; died 30 July 1865 in Montmagny, Canada East). The oldest of the Fathers of Confederation, Taché entered a long career as a politician after decades of practising medicine. He was a member of every government of the United Province of Canada between 1848 and 1857, including two coalitions with John A. Macdonald. He presided over the Québec Conference and defended the 72 Resolutions that determined the shape of Confederation.

Taché belonged to a prominent French Canadian family that had amassed wealth in New France before suffering substantial financial losses during the Seven Years War. His grandfather, Jean Taché, was a Paris merchant who settled in New France in 1730, married the granddaughter of explorer Louis Jolliet and became the largest ship owner in Québec City. Having lost his fortune in the war, Jean Taché became a notary. Étienne-Paschal Taché’s parents, Charles and Geneviève (neé Michon), raised 10 children on a limited income earned by leasing a Chicoutimi trading post that was part of the Mingan seigneurie that Charles co-owned with one of his brothers.

Étienne-Paschal Taché interrupted his education at the Séminaire de Québec to fight for the British during the War of 1812, seeing action in several battles, including Plattsburgh and Châteauguay. He began studying medicine while serving as an officer. After completing his studies in Philadelphia, he practised medicine in Montmagny for 22 years, from 1819 to 1841. In 1820, Taché married Sophie Baucher. They had 15 children.

Though Taché he did not take up arms in the rebellions of 1837, he was an ardent Patriote. After the union of the Canadas, along with his compatriots Augustin-Norbert Morin, Louis-Hippolyte LaFontaine, and George-Étienne Cartier, Taché became more willing to compromise. He was first elected to the new Assembly in 1841. In 1846, he resigned to become deputy adjutant general of the Canada East militia, and was responsible for its reorganization. In 1848, he became an executive councillor and commissioner of public works in the Baldwin–LaFontaine ministry — he was also made a legislative councillor that year. He was a member of every government until 1857. He replaced Morin as leader of Canada East and formed a ministry with Allan Napier MacNab on 27 January 1855. After MacNab resigned in May 1856, Taché joined John A. Macdonald in a ministry that sealed the alliance of Canada West Conservatives and Canada East Liberals in a unified party. The Taché–Macdonald government manoeuvred well under difficult circumstances, but Taché resigned in 1857 because of ill health, though he remained a legislative councillor. Following his retirement, Taché was knighted and appointed an honourary colonel in the British Army and aide-de-camp to Queen Victoria.

Throughout his political career, Taché had a reputation for good humour and geniality and was seen as an invaluable link between the English and French Canadian political elites. In 1846, he gave his most famous speech during a debate on a new militia bill. (At the time, relations between Great Britain and the United States were fractious because of the Oregon boundary dispute.) When the loyalty of French Canadians to the Crown came under scrutiny during the debate, Taché declared, “Our Loyalty is not one of speculation, of pounds, shillings, and pence; we do not carry it on our lips, we do not make a traffic of it. But we are in our habits, by our laws, and by our religion... monarchists and conservatives.” He recalled the service of French Canadians in the War of 1812 and concluded: “the last cannon which is shot on this continent in defence of Great Britain will be fired by the hand of a French Canadian.”

Taché returned to active politics in 1864 amidst yet another political crisis. At Governor Monck's request, he formed a coalition government with John A. Macdonald, an entirely Conservative administration that lasted only one month — the third government to fall in two years. On 22 June 1864, Taché subsequently formed the coalition ministry that was to give birth to the Confederation he passionately promoted.

In his role as premier of Canada, Taché presided over the Québec Conference in 1864. In his opening remarks, he reassured those who were concerned that Confederation would not diminish the autonomy of the provinces, stating that Confederation would be “tantamount to a separation of the provinces, and Lower Canada would thereby preserve its autonomy together with all the institutions it held so dear.” Taché’s definition of Confederation went unchallenged at the Québec Conference and set the tone for the terms of union. Taché defended the 72 Resolutions in the Legislative Council of the Province of Canada.

Taché’s death in 1865, two years before Canada’s Confederation in 1867, obscured his prominent role in the events that preceded the union of the provinces, but his conception of provincial autonomy continues to influence Canadian politics. One of his sons, Eugène-Étienne Taché, became deputy minister of lands, forests and fisheries in Québec and wrote the province’s motto, Je me souviens (I remember).