The puck is dropped at a face-off during 2010 Paralympic Games sledge hockey action at UBC Thunderbird Arena in Vancouver.

Sledge hockey was developed by three Swedish players on a frozen outdoor rink in Stockholm in 1961. The sport was introduced to Canada in 1980 and grew quickly, with the first national tournament held in 1983. Ten years later, Sledge Hockey of Canada was established to promote and coordinate the sport across the country. Canada sent a team to the inaugural sledge hockey tournament at the ​1994 Paralympic Winter Games in Lillehammer​ and won bronze. The team again won bronze at the world championships in 1996 and followed that success with a gold medal performance in 2000.

Still, Paralympic gold eluded them until 2006, when Team Canada emerged victorious in the men’s sledge hockey tournament against Norway at ​the Games in Torino, Italy​. After losing to Norway 4–1 in pool play, the team qualified for the gold medal game, where they defeated Norway 3–0. The team repeated its gold medal performance against Norway at the world championships in 2008.

Canada was unable to repeat this success on home soil at the ​2010 Paralympic Winter Games in Vancouver​. Though they began the tournament in a strong position, with victories over Italy, Sweden and Norway, their loss to Japan in the semifinals placed them in the bronze medal game against Norway, where they were defeated 2–1. 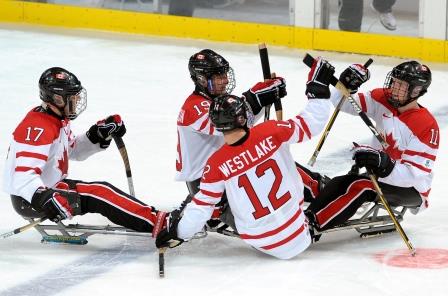 At the ​2014 Paralympic Winter Games in Sochi​, Canada once again got off to a great start. They had a perfect 3–0 record in the round robin, with a 10–1 win over Sweden, a 4–0 win over Norway and a narrow 1–0 win over the Czech Republic. The Canadians struggled to score in the semifinal, though, and lost 3–0 to the United States. The semifinal loss set up a bronze medal rematch with Norway. Though Norway defeated Canada in the 2010 Paralympic Winter Games in Vancouver, Canada was victorious at the 2014 Sochi Games. Billy Bridges scored two goals and Corbin Watson made 10 saves for the shutout as Canada beat Norway 3–0 to win the bronze medal.

Billy Bridges celebrates his goal as Canada takes on Norway in the Bronze Medal Sledge Hockey game at the 2014 Paralympic Winter Games in Sochi, Russia. 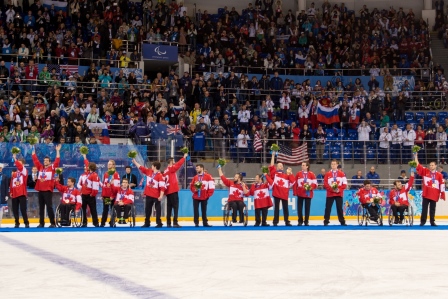 Canada dominated the opposition in round-robin play at the ​2018 Paralympic Winter Games in PyeongChang, defeating Sweden 17–0, Italy 10–0 and Norway 8–0. The team posted another shutout in the semifinal against Korea (7–0) and proceeded to the gold medal game against the United States. Billy Bridges scored late in the first period on a slapshot to the top corner of the net, giving Canada the lead, while goaltender Dominic Larocque played a spectacular game, blocking the majority of American shots on net. However, withonly about a minute to go in the game, the Americans pulled their goaltender and added another attacker to their line. US forward Declan Farmer scored the tying goal, with 37.8 seconds to go, and the game was forced into overtime. Farmer scored again 3½ minutes into overtime, delivering a heartbreaking loss to Canada. Despite this disappointment, Canada’s silver medal was the team’s strongest showing since the 2006 Paralympic Winter Games, when they won gold in Torino. 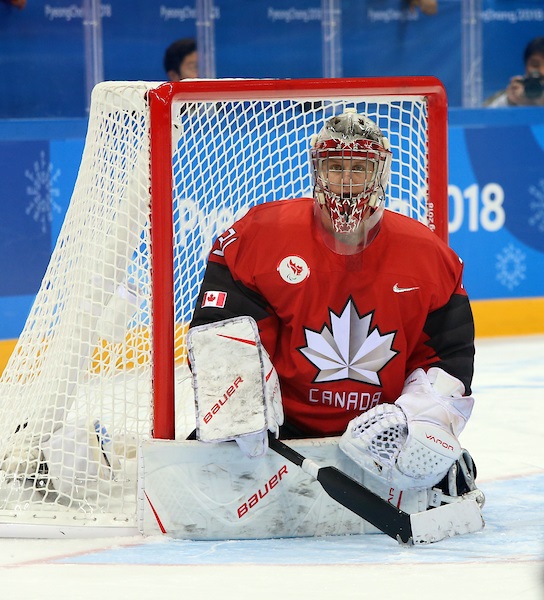 Dominic Larocque competes in the gold medal ice game against the USA during the 2018 Paralympic Games. 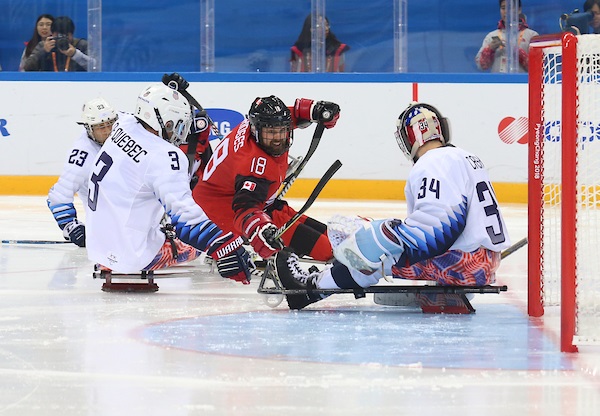 Billy Bridges competes in the gold medal ice game against the USA during the 2018 Paralympic Winter Games.
PreviousNext
×