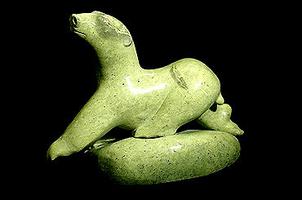 The Inuit have used soapstone for the past 7500 years (Corel Professional Photos).

Soapstone is a metamorphic rock composed essentially of talc with varying amounts of mineral impurities, including mica, chlorite, pyroxene, amphibole, serpentine, quartz, calcite and iron oxides. The rock may be massive or schistose (ie, strongly foliated and capable of being split into thinner sheets). In commercial usage the term refers to the primary product, block soapstone, and talc refers to the processed (ground) product. Colour varies from white to greenish grey and dark green. It is soft (1-2 on the Mohs scale), with a specific gravity of 2.2-2.8, but these properties vary with type and amount of impurities. Soapstone has a greasy feel (hence the name), can be ground to a powder or carved, has a high fusion point, low electrical and thermal conductivity, superior heat retention and high lubricating power. It is chemically inert.

Soapstone's use dates back to antiquity: early Egyptians carved it into scarabs and seals; in China and India it was used for ornaments, implements and domestic utensils. It was similarly used at various times over the past 7,500 years by First Nations, Inuit and Norse in Canada (see Inuit Art). In recent years, soapstone has been used to produce purely decorative, rather than functional, objects. The term "soapstone carving" is often used for sculptures carved from other soft, compact carving mediums, including serpentine and the talclike mineral pyrophyllite. Block soapstone is used as refractory material, for metalworkers' crayons, sculpture and the recently revived griddle plates. It was used infrequently as a building stone. The ground material talc is used mainly as a filler in paper, plastic, rubber and paint industries and for cosmetics and pharmaceuticals.

Soapstone is found in Québec, Ontario, BC, Alberta, Saskatchewan and Nova Scotia. Canada's first production was in 1871 from a deposit in the Eastern Townships, Qué. Canadian production of soapstone and talc comes from underground and open-pit mines in Québec (Broughton and South Bolton) and Ontario (Madoc and Timmins). Canada is a minor producer, far behind the world leaders, Japan and the US. Block soapstone for the northern carving industry is quarried from deposits adjacent to Baffin Island (Markham Bay and Qikiqtarjuaq) and scattered localities in the North. Annual production of 500-1000 t is supplemented by sculpture-grade soapstone from Québec producers who also supply hobby shops and sculptors in southern regions.