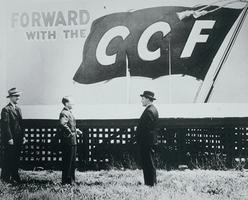 Tommy Douglas standing under a CCF billboard shortly after his election, with C.M. Fines and Clarence Gillis (courtesy Saskatchewan Archives Board).

Woodsworth was the best known of the reform-minded Social Gospel ministers and led many of them into the politics of democratic socialism (courtesy Library and Archives Canada/C-55449).
PreviousNext

The Social Gospel is an attempt to apply Christianity to the collective ills of an industrializing society, and was a major force in Canadian religious, social and political life from the 1890s through the 1930s. It drew its unusual strength from the remarkable expansion of Protestant, especially EVANGELICAL, churches in the latter part of the 19th century. For several decades the prevalent expression of evangelical nationalism, the Social Gospel was equally a secularizing force in its readiness to adopt such contemporary ideas as liberal progressivism, reform Darwinism, biblical criticism and philosophical idealism as vehicles for its message of social salvation. It developed, however, a distinctive spirituality elevating social involvement to a religious significance expressed in prayers, hymns, poems and novels of "social awakening." Its central belief was that God was at work in social change, creating moral order and social justice. It held an optimistic view of human nature and entertained high prospects for social reform. Leaders reworked such traditional Christian doctrines as sin, atonement, salvation and the Kingdom of God to emphasize a social content relevant to an increasingly collective society. The Social Gospel at large gave birth to the new academic discipline of social ethics and in Canada contributed most of the impetus to the first sociology programs.

It appeared in Canada in the 1880s, a decade of materialism, political corruption, economic distress and a growing sense of urban disorder. Moved by the difficulties of the time, by Protestant negativism and otherworldliness, and enthused by such social prophets as Carlyle, Ruskin, Tolstoy and Henry George, young Protestants such as J.W. BENGOUGH and Salem BLAND, together with idealist philosophers such as John WATSON at Queen's, precipitated a movement that by the mid-1890s had become the stuff of church journalism, ministerial institutes, college alumni conferences and youth movements. Early evidence of the church's expanding role came with the founding of city missions and institutional churches such as the St Andrew's Institute (Toronto, 1890) and the Fred Victor Mission (Toronto, 1894), followed by a chain of church settlement houses (1901-19). Whereas METHODISM probably fielded the Social Gospel most easily, between 1894 and 1910 all the major Protestant denominations created board structures to handle its mushrooming concerns. Older moral causes - TEMPERANCE, sabbath observance and social purity (against prostitution) - were reinterpreted, reinvigorated and incorporated into the progressive reforms.

Joined nationally and provincially in 1908 under Presbyterian J.G. SHEARER in the Moral and Social Reform Council, the churches readily aligned these concerns with others: the child, health, housing and urban reform.

In 1912 the council was reorganized as the Social Service Council of Canada, and the churches began sponsoring comprehensive surveys of urban conditions. In 1914 the council sponsored the first national congress on social problems. With notable exceptions, the male leadership did not give a high place to WOMEN'S SUFFRAGE, but many women of the National Council of Women, the WOMAN'S CHRISTIAN TEMPERANCE UNION and the suffrage organizations found in the Social Gospel a convenient vehicle for articulating the needed reforms based on their maternal feminist creed.

Although the Social Gospel is often categorized as an urban middle-class phenomenon, it did attract agrarian and labour reformers. W.C. GOOD of the UNITED FARMERS OF ONTARIO, R.C. Henders of the Manitoba GRAIN GROWERS' ASSOCIATION, E.A. PARTRIDGE of the Saskatchewan Grain Growers' Association and H.W. WOOD of the UNITED FARMERS OF ALBERTA were all enthusiasts, as were labour leaders, including James Simpson in Ontario, A.W. PUTTEE in Manitoba and Elmer Roper in Alberta. By WWI it had become a primary informing principle of social reform. The increase in social purpose occasioned by the war brought the movement to a height of influence as reforms it espoused - direct legislation, prohibition, women's suffrage, civil service reform, bureaus of social research, expansion of co-operatives, the decline of party government and, for some, state direction of the economy for national efficiency - all made immense strides.

Postwar unrest gave the Social Gospel further prominence through association with the WINNIPEG GENERAL STRIKE of 1919 and the PROGRESSIVE PARTY campaign, 1919-21. Radical social gospellers such as J.S. WOODSWORTH and William IRVINE became increasingly alienated from the church-based Social Gospel. In turn, its hopes and accomplishments were compromised by economic decline, the secularizing of social work and the backlash against PROHIBITION, while labour and agrarian factional strife undermined the basis of radical Social Gospel action. The formation of the UNITED CHURCH in 1925, itself in part a product of the Social Gospel, did not stem the growing crises in the movement, whose fortunes plummeted.

The reasons for decline in the 1920s were manifold: the accomplishment of many reforms; a delayed disillusionment with the war, a weariness with doing good and a general abandonment of moral earnestness for a new hedonism; and the decline of idealism as a reigning philosophy. The Social Gospel, ideologically bound to the primacy of reason in a being vitally attuned to a benevolent God, could hardly survive in a world apparently animated by power and unreason on the one hand and frivolity on the other.

However, under the impact of the GREAT DEPRESSION, a new younger generation combined the insights of Alfred North Whitehead, Reinhold Niebuhr and Karl Marx to fashion what some termed a new Social Gospel, others a form of "radical Christianity," which recognized the need for personal as well as social renewal, accepted the importance of class struggle and sought a society of "mutuality."

Associated in the Fellowship for a Christian Social Order (later complemented by the Anglican Fellowship for Social Action), most of this younger leadership (J.W.A. Nicholson in the Maritimes, King GORDON and Eugene FORSEY in central Canada, T.C. DOUGLAS and J.H. Horricks on the Prairies and Harold Allen in BC) contributed to the creation of the CO-OPERATIVE COMMONWEALTH FEDERATION (1932).

A broadly diffused older Social Gospel played a less obvious role in the creation of the SOCIAL CREDIT and Reconstruction parties and in the Depression attempts to transform the Conservative and Liberal parties. After WWII the Social Gospel could be given much credit for public readiness to maintain Canada's new welfare state and its international posture as a PEACEKEEPING nation. Sons and daughters of the Social Gospel could be found critically placed throughout both enterprises. That an almost apocalyptic age of the later 1960s and 1970s has overtaken the grandly progressive, if somewhat vaguely entertained, social hopes of a residual social gospel is evident in the limited objectives of church-based coalitions on native rights, corporate responsibility and the environment. Nonetheless, Third World Christianity, Marxist-Christian dialogue and Catholic liberation theology have had some effect in regenerating a body of Canadian Christian social thought and action reminiscent of the radical Social Gospel.