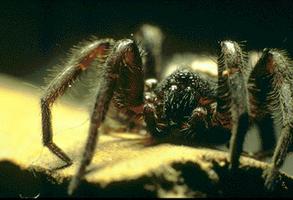 Wolf spiders have good, binocular vision for about 15-20 cm (photo by Tim Fitzharris).

A spider is a carnivorous arthropod (segmented, jointed-limbed animal) of the class Arachnida, order Araneae. About 39 000 species are known of an estimated 170 000 world total. Spiders occur throughout the world excluding Antarctica, inhabiting terrestrial and aquatic environments. About 1400 species are known from Canada, including 2 species of tarantulas (Antrodiaetus pacificus and Sphodros niger) and 2 species of black widows (Latrodectus variolus and L. hesperus) from Ontario, Alberta and British Columbia. Thirteen species of spiders occur on Ellesmere Island, the northernmost point in Canada.

Spiders have 8 legs and 2 body parts, an abdomen and a cephalothorax (fused head and thorax). Spinnerets on the abdomen produce silk, used for making webs and draglines, "ballooning," and for wrapping prey and protecting eggs. Some spiders build a new web daily, eating the old one and recycling the silk. Although most species have 8 eyes, they can only distinguish light and dark. Jumping (family Salticidae) and wolf (family Lycosidae) spiders have good, binocular vision for about 15-20 cm. The smallest spiders (family Symphytognathidae) in the world have leg spans of about 0.4 mm long; the largest spiders (family Theraphosidae) about 27 cm. The largest Canadian species (family Pisauridae, Dolomedes tenebrosus) has a leg span of about 6 cm; a European-introduced species (family Agelenidae, Tegenaria duellica) is larger at about 10 cm.

Some spiders have amazing powers of dispersal. Large spiders may crawl only a few metres per day, but small ones balloon through the air 50 km or more per day.

As spiders digest food externally, they ingest liquids only. After catching prey, they bite holes into the body wall and exude enzymes into and onto prey. The enzymes convert the prey's tissues to a soup, which is then sucked up.

All spiders are poisonous to some degree, even those few species that have poison glands partly modified into glue-spitting glands. Venom is injected into the prey to either immobilize or kill it. Black widow spiders, which are among the most poisonous of animals, are found in southern Ontario, Saskatchewan, Alberta and BC. Their venom is about 200 times as poisonous as that of a rattlesnake per unit volume.

Spiders are important predators, eating many destructive insects, and helping to control insect pests. Tarantulas have the undeserved reputation of being dangerous. Most are actually quite docile and will attack only if provoked. Their docility, ease of being tamed and size and beautiful coloration make them popular as pets.